Is Obama Doing Enough to Defeat ISIS? Experts Weigh In 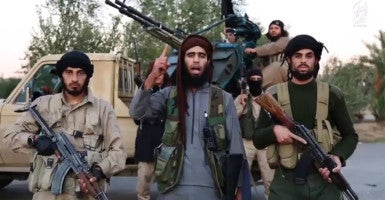 In a propaganda video released on Monday, the Islamic State vowed to attack the United States. (Photo: Polaris/Newscom)

In the aftermath of the Paris terror attacks, President Barack Obama is projecting confidence in his strategy against the Islamic State, arguing for patience and diplomacy over an escalation of military force.

Critics, meanwhile, believe that America needs to respond more aggressively or risk losing its credibility, although most of these detractors stop short of recommending a large-scale deployment of ground troops.

The best way forward, according to military and terrorism experts interviewed by The Daily Signal, is likely something more nuanced, especially in a foggy war zone involving disparate enemies and tricky alliances.

“Here is the dilemma we are facing: We all share the consensus the only way this terrorist organization can be degraded is to deploy infantry and an actual army to defeat what is now a jihadist army,” said Bilal Saab, a senior fellow for Middle East security at the Atlantic Council.

“The challenge is the U.S. will not be deploying boots on ground itself—for very good reason. The challenge is to convince our [Middle East] allies to lead the fight to deploy men and women to fight ISIS. It is the ultimate challenge, it is a diplomatic one, with a military component.”

The problem with depending on others to lead, Saab says, is that many of the parties local to the fight don’t have the will to do so.

“The problem is that many don’t see it is as an urgent priority to fight ISIS,” Saab said. “In Turkey, their biggest worry is not ISIS, but the Kurds. The Iraqi Shia won’t take the extra mile to fight ISIS, because they only care about defending Baghdad and that’s it. The moderate Syrians are way too weak now and we should have supported them a long time ago. So does that mean we wave the white flag and declare ISIS victorious? No, we have to be realistic about what can be done to convince those partners to get their act together.”

In making the argument for local forces leading the fight, Saab is adopting the line of thinking that has dominated Obama’s yearlong strategy in Syria and Iraq to defeat the Islamic State, also called ISIS, ISIL, and Daesh. President Barack Obama defended his ISIS strategy during remarks to the press in Turkey on Monday. (Photo: Depo Photos/ZUMA Press/Newscom)

In essence, Obama believes that the only way to defeat the Islamic State’s underlying ideology is to convince Sunni Muslim states, with backup from the U.S., to lead the fight.

The U.S. can best lay the groundwork for the Islamic State’s defeat, Obama argues, by taking back territory from the terrorists, and helping to negotiate a diplomatic solution to the war in Syria, and the fate of its dictator, President Bashar al-Assad.

“This is not a traditional military opponent,” Obama told reporters Monday at the Group of 20 summit in Antalya, Turkey. “We can retake territory, and as long as we keep troops there, we can hold it. But that does not solve the underlying problem of eliminating the dynamics that are producing these violent extremist groups. The ability to shrink where they operate, combined with a resolution to the Syrian conflict, and getting local forces who are able to hold and keep them out over long-term, that will be what makes a difference.”

Michael O’Hanlon, the director of research for the foreign policy program at The Brookings Institution, argues that isn’t enough, especially in the wake of the terrorist attacks in Paris.

“This is a moment and opportunity we need to seize,” O’Hanlon said. “Obama is not right [to be cautious]. We need to show clarity in our purpose and a realistic matching of means to ends. The region [Middle East] knows that so far, we haven’t been serious.”

While calling his strategy the “right” one, and vowing to “continue to pursue the strategy that has the best chance of working,” Obama has actually been intensifying military operations.

The U.S. recently began supplying weapons to Arab and Kurdish fighters in northern Syria, who have gained territory from the Islamic State.

Last week, U.S. airstrikes helped Kurdish fighters capture the city of Sinjar, Iraq, which has served as a key supply route for the Islamic State.

And on Monday, according to the New York Times, U.S. warplanes for the first time attacked trucks the Islamic State has been using to smuggle the oil it produces in Syria, in a bid to wipe out its main revenue source.

“I think what makes this [the Paris attacks] particularly difficult is that up until Friday evening, the U.S. had the sense its strategy was starting to bear fruit and starting to make a difference,” said Rebecca Zimmerman, an associate policy analyst at the RAND Corporation.

“They are struggling to integrate two realities—the thought they were starting to get somewhere, and, ‘Oh dear lord, this is possibly worse than we thought.’”

Zimmerman contends that a deployment of ground troops should not serve as a natural ascension of that plan.

“I’m not sure what we would do strategically when we get there,” Zimmerman said. “If we learned anything from Iraq, it’s that we consistently have been wide of the mark in actually solving the underlying conditions that keep creating these situations over time. The U.S. has a failure of imagination to be able to imagine how much worse things can get.”

Zimmerman, though, believes that Obama could place U.S. Special Forces near the front lines to more precisely direct airstrikes.

The U.S. coalition has conducted more than 8,000 airstrikes against ISIS since August 2014, but critics say that isn’t enough.

No matter the level of military action, all sides agree that it must be backed by diplomacy. This past weekend in Vienna, Secretary of State John Kerry led negotiations to resolve the Syrian civil war, which led to the rise of the Islamic State.

Most observers believe that bringing peace to Syria by helping it transition to a democratically elected government is necessary to end that country’s role as a breeding ground for ISIS and other terrorist groups.

That challenge has been made more difficult by the injection of Russia into Syria, and the continued presence of Iran.

Russia and Iran generally support Assad’s government and are providing military support to prop him up, while both countries oppose the Islamic State.

“There are two issues here: one is ISIS; the other is Assad,” said Steve Bucci, a foreign and national security expert at The Heritage Foundation. “Clearly they complicate each other, but we need to decouple them. We need to get the Russians on board with crushing ISIS, not propping up Assad. We should avoid any new concessions or collaboration with Iran. It badly complicates getting the Sunni governments on board.”

In a sign of how complicated the dynamics are, however, Saab argues for engaging non-allied nations to resolve the Syria conflict.

“I do not see it as an unsolvable challenge to convince the Iranians and Russians to terminate this civil war,” Saab said. “We can tell them we will work on a political arrangement that preserves your core interests, we know what your red lines are, and we understand you have influence we don’t, so there’s no reason you can’t be brought on. We did spectacularly well during the Cold War talking to our enemies, so there’s no reason we can’t do so today.”