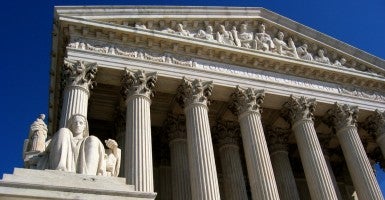 The Supreme Court of the United States(Photo: Flickr zacklur/CC BY-NC-SA 2.0)

The Supreme Court will decide one of the most important cases on abortion policy in recent years by the end of June. Today, the justices announced that they will decide whether to uphold parts of a Texas law requiring abortion clinics to meet basic health and safety standards and abortion doctors to have admitting privileges at local hospitals.

Known as H.B. 2, the Texas law requires, among other things, that abortion clinics meet the same regulations for cleanliness and safety as other outpatient surgical facilities and that doctors working in those clinics have admitting privileges at nearby hospitals. These provisions help to ensure that women are not subject to substandard conditions or practices that could jeopardize their health and even lives.

These regulations are common sense and much-needed policy measures. The dangerous, unsanitary conditions of Philadelphia abortionist Kermit Gosnell’s “house of horrors” shocked the nation when they came to light during his 2013 murder trial. But Gosnell’s clinic—though one of the more horrific—is not an outlier in the abortion industry.

Dozens of other abortion clinics across the country have faced investigations, complaints, and criminal charges. Many continue their life-ending work with little to no oversight or inspection.

While it claims to advocate for women, the abortion industry is often the one fighting reasonable laws to ensure its patients’ health and safety.

In Texas, abortion clinics have challenged parts of H.B. 2, arguing that the law unconstitutionally burdens women’s access to abortion because it will result in the closure, at least temporarily, of a number of abortion facilities that would fail to meet the new safety standards.

As the U.S. Court of Appeals for the Fifth Circuit noted in its decision on the Texas law earlier this year, however, even as the Supreme Court invented a constitutional right to abortion in 1973 in Roe v. Wade, the justices were clear that the decision doesn’t preclude states placing reasonable requirements on abortion clinics and doctors. Specifically, the Supreme Court found:

The State has a legitimate interest in seeing to it that abortion, like any other medical procedure, is performed under circumstances that insure maximum safety for the patient. This interest obviously extends at least to the performing physician and his staff, to the facilities involved, to the availability of after-care, and to adequate provision for any complication or emergency that might arise.

Since the Roe decision, the Supreme Court has further defined the contours of the supposed right to abortion and what states can do to regulate the abortion industry. In Planned Parenthood of Southeastern Pennsylvania v. Casey, the Supreme Court determined that states may not impose an “undue burden” with the “purpose or effect of placing a substantial burden in the path of a woman seeking an abortion[.]” The Supreme Court clarified in Gonzales v. Carhart that laws regulating abortion must pass rational basis review—the lowest standard of review—which requires that a particular regulation be rationally related to a legitimate state interest.

In upholding the abortion clinic regulations, the Fifth Circuit panel concluded that H.B. 2 met those legal standards: “Texas’ stated purpose for enacting H.B. 2 was to provide the highest quality of care to women seeking abortions and to protect the health and welfare of women seeking abortions. There is no question that this is a legitimate purpose that supports regulating physicians and the facilities in which they perform abortions.”

Further, the panel found that the district court erred by “substituting its own judgment for that of the legislature,” on whether H.B. 2 advances the state’s interests in maternal health and increased quality of care.

When the Supreme Court manufactured a right to abortion in 1973, it took the issue out of the hands of the American people, preventing citizens and legislatures from making reasoned policy and fully weighing the impact of abortion on the lives of women and unborn children. The result is that U.S. abortion policy has become extreme among developed nations in allowing elective, late-term abortions, and a lucrative, yet largely unaccountable, abortion industry daily endangers the lives and health of women.

For more than 40 years, the abortion industry has evaded and fought commonsense regulations. The Supreme Court now has the opportunity to confirm that states have a legitimate and compelling interest in better ensuring the safety and health of women who enter abortion clinics.

While this case does not directly present the justices with the opportunity to overrule Roe v. Wade, Arkansas recently filed a petition asking the Court to overrule a key part of the legal standard created in Roe and refined in Casey.

In Beck v. Edwards, Arkansas asks that the Court overrule the “viability rule,” which essentially mandates unfettered access to abortions before unborn babies are considered “viable” even if the child already has a heartbeat, brain activity, or the ability to feel pain. If the Court heard this case and ruled in favor of the state, that would be the greatest victory for the pro-life movement to date.

In the meantime, the Supreme Court will hear oral arguments in the Texas case this spring and should release its opinion by the end of June. The justices would do well to uphold the reasonable law in Texas and reconsider the long, deadly shadow its abortion decisions have cast over law, medicine, and society.