Is the GOP Giving Up on Repealing Obamacare? 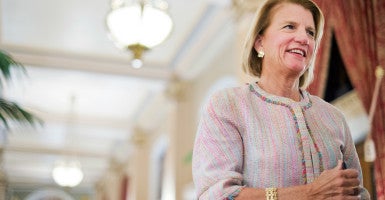 Sen. Shelley Moore Capito is suggesting she isn't up for getting rid of the Medicaid expansion that's part of Obamacare. (Photo: Tom Williams/CQ Roll Call/Newscom)

Some Republican senators are no longer committed to full repeal of Obamacare.

That’s the takeaway from recent statements made by GOP senators about the Medicaid expansion, and whether or not repealing it will be included in the partial Obamacare repeal the Senate votes on via reconciliation (which means they need only 51 senators to vote in favor of it).

And one anonymous GOP senator told The Hill, “Repealing the Medicaid expansion is not going to be in there because it’s too problematic for many Republicans.”

This is a problem, because the Medicaid expansion is a crucial part of Obamacare. Of the 9.25 million Americans who gained health insurance in 2014, nearly 9 million of them gained it through Medicaid, according to research by The Heritage Foundation.

Essentially, much of the coverage gains through Obamacare can be attributed to people going on Medicaid. That’s not shocking, as Obamacare hugely expanded eligibility for Medicaid, making it available to anyone at 138 percent of federal poverty level or below. (A Supreme Court decision allowed states to decide whether they wanted to allow the Medicaid expansion; some have, and others haven’t.)

But Medicaid isn’t the panacea it’s been advertised as. According to a study released in December of last year from the Office of the Inspector General of the Department of Health and Human Services, being on Medicaid doesn’t mean you have ready access to health care.

We found that slightly more than half of providers could not offer appointments to enrollees. Notably, 35 percent could not be found at the location listed by the plan, and another 8 percent were at the location but said that they were not participating in the plan. An additional 8 percent were not accepting new patients. Among the providers who offered appointments, the median wait time was 2 weeks. However, over a quarter had wait times of more than 1 month, and 10 percent had wait times longer than 2 months.

However, those lousy results don’t come cheap. “For Medicaid, cost and enrollment are expected to continue to grow, in particular due to the expansion of the program under the Affordable Care Act,” wrote Robert Moffit and Nina Owcharenko, both of The Heritage Foundation, in July. “By 2023, total Medicaid spending is projected to climb to $835 billion, and enrollment will near 80 million.”

Nor does the expansion necessarily benefit whom you’d expect. According to 2012 projections from the Urban Institute, 82 percent of those expected to be eligible for Medicaid under the 138 percent level were childless, while 52 percent were between the ages of 18 and 34.

Ultimately, repealing Obamacare without ending the Medicaid expansion means you’re leaving a very significant part of the law in place.

But why would lawmakers want to do that? After all, full repeal of Obamacare remains popular. A Heritage Foundation survey conducted in early October found that 62 percent of voters agreed with this statement:

Congress should send a full repeal package on Obamacare to the president’s desk. Half attempts and partial repeals that only shed a few parts of Obamacare and leave in place subsidies, Medicaid expansions, burdensome insurance regulations, and huge taxes for all Americans renege on their promise to the American people to get rid of the law.

So what’s with the cold feet?

Nor is it just Senate Republicans who are backing off full repeal. House Republicans recently passed a partial repeal of Obamacare that left in place the Medicaid expansion.

For years, Republicans have campaigned on repealing Obamacare. But it appears that for too many, when they have the opportunity to fully repeal the law, there’s no interest in actually doing it.