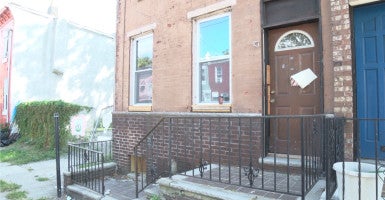 The Philadelphia District Attorney's Office forfeited this residence on Jackson Street that had been a haven for three generations of drug dealers. (Photo: Tate Holcombe/The Daily Signal)

PHILADELPHIA—Longtime residents know East Walnut Lane, on the outskirts of Philadelphia County, as a quiet street.

It’s a street lined with houses all featuring the same façade—stone on the first story, brick on the second; alternating black and white screen doors; four steps leading up to the front porch. It’s a street that has been home to neighbors who mostly kept to themselves.

In 2012, though, a group of five women living on East Walnut Lane began to notice a change.

>>> Second article in a three-part series. Read the first part here and the third part here.

The constant flow of visitors headed for one house near the end of the block, where a woman named Sharon Byrd and her boyfriend, Khaleef Fulton, lived.

Along with the traffic came disturbances in the middle of the night—fights on the lawn and sidewalk, odd gatherings in the backyard, a continuous flood of strangers in and out of Byrd’s house.

It didn’t take long before the neighborhood women began talking, sharing their odd exchanges with Byrd and discussing how their block had changed.

Byrd, the women were convinced, was selling drugs out of her home. The activity there had turned their quiet, safe block into a worrisome, sometimes disturbing place to live.

The five women banded together and approached Lt. Anthony Buchanico of the Philadelphia Police Department.

Police, it turned out, had fielded many complaints about drug activity at Byrd’s house, receiving more than 30 service calls.

So Buchanico enlisted the help of the Public Nuisance Task Force of the Philadelphia District Attorney’s Office. The task force of police and prosecutors conducted an investigation at the start of 2013 and eventually found crack cocaine, the anti-anxiety drug Xanax, codeine syrup, and items related to cocaine distribution in the house. Byrd and Khalif were arrested and charged with drug possession with intent to manufacture or deliver.

On March 5, 2013, the District Attorney’s Office filed a forfeiture petition for the house on East Walnut Lane, according to documents provided to The Daily Signal. One day later, authorities seized and sealed the home.

After Byrd and her lawyer missed eight hearings in court, the house officially was forfeited and became the property of the district attorney’s office on Feb. 23, 2014.

This month, the office plans to sell it at a public auction.

The city’s action, meanwhile, brought a collective sigh of relief among the ladies of East Walnut Lane.

“If you know your neighbors, and you know that’s who belongs there, then that’s comforting,” adds Kathy, who doesn’t want her last name used.

Over the past few years, Philadelphia has become notorious for using the process of civil asset forfeiture, which gives law enforcement the power to take cash, motor vehicles, and other property suspected of being tied to a crime.

Opponents of the process say too many property owners have had belongings taken by Philadelphia law enforcement yet never are charged with a crime. The abuse of the practice, they say, is an infringement of constitutional rights.

Andrew Jenemann, head of the Public Nuisance Task Force that oversees the forfeiture program, sees it differently. Jenemann, an assistant district attorney, points to Byrd’s house as  an instance where forfeiture is a vital tool. In an interview with The Daily Signal, he says:

When you shut down a drug house, it’s basically like shutting down a base of operations, and that’s ultimately what we are required to prove in a forfeiture case, is that a drug house is more than or different than a normal residence. It’s actually being used in a way like a retail establishment for drugs, for illegal drugs, and that changes its purpose from a normal home to something illegal and something that’s really corrosive to the community.

Sometimes it’s necessary for a house to be seized and turned over to the city, Jenemann says. In Byrd’s case, a quiet neighborhood was turned on its head for more than a year because of drug activity.

And the women of East Walnut Lane agree.

“It was disturbing,” a 47-year-old neighbor, who asks to speak anonymously, tells The Daily Signal during an interview outside Philadelphia’s Simons Recreation Center. “It didn’t feel safe. I’m praying good people move in.”

Typically, when authorities seize a house and a court grants the forfeiture, the property will go to a public auction.

After a legal organization filed a class action lawsuit against the city for its use of civil asset forfeiture, however, prosecutors halted the auctions. Jenemann says the city is scheduled to resume them this month, when Byrd’s house will be sold.

The house on East Walnut Lane has remained vacant for more than a year. The same neighbors who alerted police to the activity there have been making sure the property is maintained, which they hope will remind visitors looking for Byrd that drugs no longer are sold there.

“We keep the lawn cut. We try to keep it presentable,” Kathy says. “The windows are barren, but they’re not boarded up, so it doesn’t look like a total abandoned house. But it needs help. It needs repair.” As part of the auctions, the city conducts background checks on those looking to purchase a property. Jenemann says this helps ensure a home doesn’t become a drug house again:

We want to turn it over to people that are going to be active, productive members of the community, that are going to work hard and pay their taxes and do what you would expect. And the people that live on this block have the right to expect that. They have a right to get out of bed and go to work every day without having to worry about people selling drugs and shooting each other on the streets.

Seventeen miles south of the house on East Walnut Lane sits 636 Jackson St., which was a haven for drug dealers for more than a decade.

The house, on the southern end of Philadelphia, has a tan painted exterior that is riddled with cracks. An old pair of flip-flops lie on the stoop.

The house on Jackson Street, previously owned by Marie Fickling, has seen three generations of drug dealers—including her son, grandson, and great-grandson. From July 1999 to July 2007, police made numerous arrests to the house in connection with drug offenses and gun sales. Drugs such as marijuana, heroin, and crack cocaine were sold at the house. Police tied shootings on the street to drugs.

As with the house on East Walnut Street, Jenemann says, neighbors actively worked with the district attorney’s office. They were “very vocal” in making sure drug dealers on their block of Jackson Street were arrested and charged.

Law enforcement seized Fickling’s house in January 2012. Fickling appealed in 2013, but later that year the Commonwealth Court granted the forfeiture. The property was sold at auction last November.

Now the house is under renovation. When The Daily Signal visits the property with Jenemann, the sounds of buzz saws and hammering have replaced the gunshots and heavy foot traffic.

Next door is a newly built park. The neighbors recently hosted a block party, something Jenemann says likely hasn’t happened in years.

If Fickling’s house hadn’t been forfeited and turned over to his office, Jenemann says, it would have been home to criminal activity for years to come. The hope is that the property is “turned back into a home,” he says.

“And the primary good that comes from when forfeiture is used properly and used in this manner is the transformative effect that it can have on the neighborhood.”