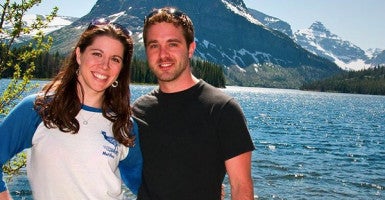 Story updated to include the latest fundraising total.

A memorial fund created to support the children of Jake Brewer, a White House staffer who died during a charity bike ride Saturday, reached its $200,000 goal in donations a day after it was launched.

Brewer, 34, was married to Mary Katharine Ham, a former Heritage Foundation employee who is the editor at large of HotAir.com and a Fox News contributor. The memorial education fund will support the couple’s daughter, Georgia, 2, and a baby soon to be born.

We lost our Jake yesterday, and I lost part of my heart and the father of my sweet babies. I don’t have to tell most of you how wonderful he was. It was self-evident. His life was his testimony, and it was powerful and tender and fierce, with an ever-present twinkle in the eye. I will miss him forever, even more than I can know right now. No arms can be her father’s, but my daughter is surrounded by her very favorite people and all the hugs she could imagine. This will change us, but with prayer and love and the strength that is their companion, we can hope our heartache is not in vain– that it will change us and the world in beautiful ways, just as he did. If that sounds too optimistic at this time, it’s because it is. But there was no thought too optimistic for Jake, so take it and run with it. I will strive and pray not to feel I was cheated of many years with him, but cherish the gift of the years I had. In a life where nothing is guaranteed, Jake made the absolute, ever-lovin’ most of his time with all of us. This is a family picture we took a couple weeks ago. It was taken because Jake, as always, was ready with a camera and his immense talent. All four members of our little, growing family are in it. I can never be without him because these babies are half him. They are made of some of the strongest, kindest stuff God had to offer this world. Please pray that he can see us and we’ll all make him proud. God, I love him. Psalm 34:18, Philippians 1:3

Brewer died Saturday after losing control of his bike and being struck by a car during the Ride to Conquer Cancer, a two-day 150-mile event from Washington, D.C., to Mount Airy, Md., and back.

News of Brewer’s death prompted an outpouring of support for across the political spectrum, including a statement from President Barack Obama:

I am heartbroken at the tragic loss of one of my advisors, Jake Brewer. We set out to recruit the best of the best to join their government and help us harness the power of technology and data to innovate new solutions for the 21st century. Simply put, Jake was one of the best. Armed with a brilliant mind, a big heart, and an insatiable desire to give back, Jake devoted his life to empowering people and making government work better for them. He worked to give citizens a louder voice in our society. He engaged our striving immigrants. He pushed for more transparency in our democracy. And he sought to expand opportunity for all. I’ve often said that today’s younger generation is smarter, more determined, and more capable of making a difference than I was as a young man. Jake was proof of that. Michelle and I are praying for all of Jake’s family and his many friends, most of all his wife, Mary Katharine Ham, their daughter, Georgia, and their growing family. They’ll always have a family here at the White House.

The memorial fund was started Sunday afternoon by Guy Benson, co-author with Ham of “End of Discussion.” He set a goal of $200,000; half of the money was raised by 11 p.m. Sunday. Benson said the contributors will provide for the Brewers’ education.

Ham encouraged others to donate to the Travis Manion Foundation in support of families of U.S. servicemen who have died.