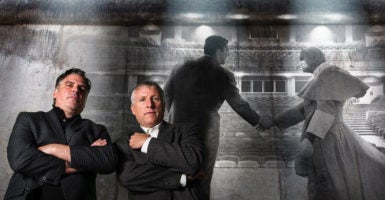 Filmmaker Robert Orlando and historian Paul Kengor on one of the sets for the movie "The Divine Plan," about President Ronald Reagan and Pope John Paul II. (Photo: Nexus Media )

Both men were actors who climbed to prominent positions on the world stage late in life.

Both men were fierce anti-communists who fought to restore religious liberty where it had been suppressed.

And both believed they had been spared to play key roles in a “divine plan” at a critical moment in human history.

The partnership between the Catholic pope and the Protestant president in the closing, dramatic years of the 20th century is the subject of an upcoming film that includes interviews with prominent religious figures, Cold War historians, and presidential biographers.

“The Divine Plan: Reagan, John Paul II and the Dramatic End of the Cold War” is told as part “graphic thriller,” part stage play, and part documentary exploring the steady chain of communication and interaction among the Reagan White House, the U.S. intelligence community, and the Vatican.

“I wanted to include graphic images because they can convey certain aspects of history that are less well known and more obscure,” Robert Orlando, president and director of Nexus Media, a Princeton, New Jersey-based filmmaking studio, said in an interview with The Daily Signal.

“I didn’t want to use tired footage because I wanted to bring history alive, not just to people who have some familiarity with the subject, but also to younger audiences,” Orlando said.

Orlando, whose past films include “Apostle Paul: A Polite Bribe” and “Silence Patton: First Victim of the Cold War,” produced and directed “The Divine Plan.” He collaborated with Paul Kengor, a political science professor and Reagan biographer, to produce the movie with a wealth of historical material.

Kengor, who appears in the film, is author of “A Pope and a President: John Paul II, Ronald Reagan, and the Extraordinary Untold Story of the 20th Century,” which cites evidence pointing to a possible Soviet role in the assassination attempt on the pope.

A follow-up to that book titled “The Divine Plan” will be released in tandem with the film next spring. Orlando is in discussions with several potential distribution partners for the movie’s release in theaters and on television and home media.

‘No Way Putin Would Have Known’

The film describes how Kengor came across “a rare public statement” by William Clark, Reagan’s former national security adviser, during a 1984 reunion of Army counterintelligence veterans. Clark said he believed the Soviets were behind the assassination attempt on the pope.

Clark apparently left behind a penciled note that suggested a Bulgarian connection to the plot against John Paul II, and that the Bulgarians would not have acted without Soviet direction.

The film notes Russian President Vladimir Putin and his career in the Soviet secret police agency, the KGB.

“Something that’s obviously very intriguing about this is that working in the KGB in the 1980s at the time was a lower ranking lieutenant colonel named Vladimir Putin,” Kengor says of the assassination attempt in the film, adding:

To be clear, there’s no way Putin would have known anything about this. There’s no way he would have been involved. This was the tightest thing the Soviets ever did in their three quarters of century of murder and mayhem. Very few people knew about this.

However, I can’t imagine that today Vladimir Putin, who’s been in charge of the former Soviet Union since 2000 … he surely now knows what happened, and what the role of the KGB and the GRU [the Soviet foreign military intelligence unit] was.

John Paul II acknowledged in private that he suspected the Soviets, but declined to make any public statements because he was concerned about the international fallout, according to the film.

An Aspect of Reagan’s Faith

“Reagan always believed in the divine plan,” Orlando said. “He was a man of Christian faith and the assassination attempt galvanized him, because when he came close to death he was afraid he was running out of time, and he actually prayed in the hospital.”

Although Reagan was Protestant, he was in many ways “a cultural Catholic,” Craig Shirley, another Reagan biographer, says in the film.

Reagan’s father was Catholic, but their relationship was strained because of his father’s struggle with alcoholism, the film explains.

“Reagan’s faith came from his mother, who was Protestant. He always believed in a divine plan because his mother told him everything happens for a reason,” Orlando said. “But he had good relationships with Catholics, who did have prominent positions in his administration.”

Several prominent Catholics were connected with the Reagan White House, including William Casey, Reagan’s first CIA director; Richard Allen, his first national security adviser; and Vernon Walters, a retired Army general who was his second ambassador to the United Nations.

“Both Protestants and Catholics would believe in the divine plan,” he said. “There would be a difference in emphasis, but there would be some commonality.”

Casey, as CIA director, was instrumental in providing the pope with satellite images of Soviet troop movements and the positioning of Soviet intercontinental ballistic missiles, Orlando told The Daily Signal.

“Apparently, Allen was the one getting the satellite images to Casey so he could take them to the Holy Father, and Casey would come back to Allen and report on the Holy Father’s reaction,” Orlando said, adding:

This is where some of the graphics in the film come into play. When you are talking about satellite images, they can’t all be small and photo-sized. I’m thinking of larger pictures. So, that’s where I came up with the idea of the pope spreading these photos out across the floor. We can’t know exactly how this all went down, but the graphics do convey to viewers how powerful and impactful this moment must have been.

And what did the pope see on those satellite images?

He would have seen Soviet troop movements and how ICBMs were positioned, aimed, and targeted at certain parts of  Europe, the film explains.

The photos also would have provided the pope with images of the Gdansk Shipyard, the birthplace of the Solidarity trade union in Poland that challenged Soviet authority, Orlando said.

“The pope would have been traveling to all of these places within range of Soviet missiles while he was preaching religious freedom,” he said. “This certainly had a powerful impact on him when he made these trips.”

After Allen left the first Reagan administration in January 1982, Casey continued to pursue intelligence sharing with the Vatican.

Allen’s later role, if any, is not discussed in the film. The Daily Signal sought comment from Allen, who cooperated with the filmmakers, but he had not replied as of publication time.

“There was constant correspondence going on between the two, so many letters, telegrams, and electronic communication,” Kengor says in the film. “By the end of 1981, John Paul II and Ronald Reagan had exchanged a dozen or so letters.”

At that time, Reagan had been president for fewer than 12 months.

Robert Barron, founder of  Word on Fire Catholic Ministries and auxiliary bishop of the Archdiocese of Los Angeles, comments in the film on the shared convictions and experiences of the two men.

John Paul certainly would have viewed the attempt on his life “according to the template of the cross and resurrection of Jesus,” Barron says in the film.

“Did it give him a heightened sense of his mission to struggle against what he saw quite correctly as the supreme evil in the world at this time? I’d say yes, absolutely. And that brings him close to Ronald Reagan.”

On the subject of a divine plan, Barron makes the point that “it’s not a zero-sum game” in the sense that “the more God does, the less we do; the more we do, the less God is involved.”

Instead, the bishop says, “God draws our freedom, he lures our freedom, so that he has a plan but he wants us cooperating with it.”

The time John Paul II spent during his youth as an actor and playwright also helped to prepare him for the world stage, Barron says.

“Go to the Vatican and it is a stage set; it’s built for processions and speeches and public displays,” Barron tells viewers.

Reagan and John Paul II met in person on five different occasions over an eight-year period, according to the film.

Their last meeting took place in September 1990, nearly 14 years before Reagan succumbed to pneumonia, complicated by Alzheimer’s disease; the pope, himself gripped by Parkinson’s disease, died in April 2005.