Why the Stock Market Shouldn’t Be Used to Judge Brexit 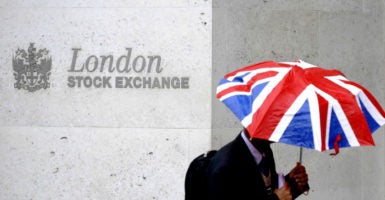 Whether Brexit was a wise choice should not be evaluated by falling stock markets this week or a soaring economy next year. Good institutional arrangements sometimes arrive at bad policy choices, and vice versa. (Photo: Toby Melville /Reuters/Newscom)

Last week, the United Kingdom decided to leave the European Union. The U.K.’s earlier decision to stay out of the euro currency (which most, but not all, EU member states use) contains an unexpected lesson about economics and humility.

In 2003, British Chancellor of the Exchequer Gordon Brown announced that Britain’s economy had not met the five criteria necessary for joining the euro and abandoning the pound.

With the political mood firmly against entry into the euro, pro-euro Prime Minister Tony Blair allowed Brown’s test to stand. Both men favored eventual accession to the euro, but were convinced that economic conditions in the U.K. were sufficiently different than those in mainland Europe that monetary union was risky.

Although the question of euro entry was debated by economists at the time, it is now widely believed that the Bank of England, which issues the pound, performed much better than the European Central Bank in the aftermath of the financial crisis of 2007 and 2008.

In one sense, the British economy’s post-2008 growth proved Brown right: his country was better off out than in. But that was not a result of the U.K.’s differences from the eurozone. Rather, in the most common view, it was tight monetary policy enacted by the European Central Bank before the recovery had taken hold.

As a result, Britain (like the U.S.) had a single recession, while most of Europe had two recessions in quick succession.

The Bank of England’s success was therefore a matter of better policy choice, not a better institutional framework. If European Central Bank economists had made better decisions in 2009 and 2010, hindsight might look very differently on Brown’s 2003 choice.

Commenters firmly predicting either a calamity, or an economic miracle, as a result of Britain’s recent vote to leave the EU should be warned: Short-term economic swings depend very little on institutions. Although in the long run, strong institutions protect economic liberty and maintain incentives for farsighted investments, they do not protect against depressions or guarantee booms.

Whether Brexit was a wise choice should not be evaluated by falling stock markets this week or a soaring economy next year. Good institutional arrangements sometimes arrive at bad policy choices, and vice versa.

Over time, good institutions are those that produce slightly better policies and stand up to large external shocks.