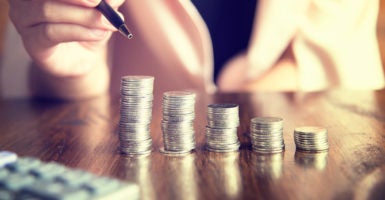 The transactions tax has already been tried in other countries and backfired. (Photo: chadchai rangubpai/Getty Images)

A new tax proposal in Congress aims to stick it to the rich. But if passed, it could devastate the U.S. financial system and ruin the value of ordinary Americans’ retirement accounts.

The proposal, introduced by a team of Democrats in the House and Senate, would assess a penalty each time someone sells a stock, bond, or other financial instrument. It would tax each of the roughly 10 billion U.S. equity market trades each year, among other transactions.

The goal, presumably, is to hit the rich. But the stock market is not just a tool for the wealthy.

Some of the largest shareholders and beneficiaries of our modern financial system are pension funds for public-sector employees and private retirement account holders. Firefighters, teachers, university endowments, and private retirement savings all benefit from sophisticated equity markets. Many employers issue short-term debt to cover payroll and young start-ups sell securities to fund their growth.

The stock market may seem opaque to the average American, but they still benefit from it through new jobs, advances in productivity, and increases in retirement and other invested savings.

This proposal would handicap markets for U.S. saving and investment. It would levy a tax of 0.1 percent on the value of every stock, bond, and derivative transaction in the U.S. or made by a U.S. resident.

Depending on the purveyor you listen to, this new tax could make the stock market fairer and less volatile. The tax would stop the dreaded practice of high-frequency trading, whereby large volumes of trades are made quickly by algorithm. Its backers also project that it would raise a sizable chunk of revenue that purportedly would be paid by the “rich.”

But a financial transactions tax fails to meet each of these goals. It would increase rather than decrease market volatility; it would hurt digital traders, who benefit the market; it would not raise as much revenue as projected; and the tax would ultimately be paid by American savers through lower investment returns and fewer economic opportunities.

A financial transaction tax is not a new idea. The Congressional Budget Office regularly includes it in its yearly list of budget options. Its report notes, however, that the tax could “have a number of negative effects on the economy stemming from its effects on asset prices, the cost of capital for firms, and the frequency of trading.”

These concerns bear out in the real world, too. Evidence from France’s experiment with a transactions tax in 2012 shows that it lowers trading volumes and reduces market liquidity, which hurts market quality.

Fewer trades mean it is harder to buy and sell stock, and markets operate less efficiently. Inefficient markets hurt everyone. They translate into fewer new jobs and less productive investment.

The transactions tax is designed to cut out short-term and speculative traders who trade for small gains by increasing cost of the trade. But without these participants, market prices are less accurate, leading to more frequent and larger price swings. This is borne out in a 2015 study that shows how the tax would indeed increase the likelihood of boom-bust cycles and exacerbate overall return volatility.

As written, the bill is so expansive that it would likely tax short-term, non-exchange traded commercial paper that is used to cover short-term business obligations, like payroll. So a transactions tax could make paying workers more expensive.

The tax would also increase costs for small businesses and start-ups trying to raise funds. A start-up that sells $50 million in securities would now owe a $50,000 tax—not a trivial sum.

But most of all, the tax would hurt ordinary American savers.

In the United Kingdom, it was estimated in the 1980s that cutting the limited financial transactions tax rate “from 2 percent to 1 percent would have led to a 10 percent rise in share prices.” To the extent there is a transactions tax, stock values will fall.

A transactions tax would therefore decrease the stock of wealth for any American who has investments. Private retirement accounts and pension plans could be hurt the most.

Consider a retirement account: a $300,000 self-directed IRA equities portfolio turning over once every year. Just a 0.1 percent tax would result in additional costs of $300 annually. This may sound minimal, but a $300 annual investment growing at 7 percent amounts to more than $20,000 after 25 years.

Perhaps most fundamentally, the tax would impose its largest effective rate on marginal investments—those investments that just barely make a profit. These are the more common type of investments , even though high-return projects are also important.

For instance, under the proposed tax, a block of 1,000 shares of a $25 stock that is sold for $25.01 would face a 250 percent tax rate on the profit made from the sale. By design, these marginal investments are the type that would be most harmed by a transactions tax. The higher the tax rate, the larger the harm.

Despite claims that a new tax would have little effect, history shows that traders respond markedly to new transactions taxes. This means such proposals raise “significantly lower revenues than projected,” as Coelho found in Italy and France.

It is unlikely the new tax would raise anything close to the $777 billion over 10 years that proponents hope for.

It is clear that financial transactions taxes are a poorly designed policy for achieving their proponents’ stated goals. But even if it were the best way to raise revenue, we should question whether maximizing revenue is even a proper goal for governments to have as a matter of policy.

The government class will always have an insatiable desire to tax and spend at ever higher levels, which means it will search for new and innovative ways to raise revenue. Governments, like most monopolies, are prone to waste and inefficiency.

A better course of action is for Washington to let people of all income levels keep more of the money they earn—to spend, save, and invest how they see fit for themselves, their family, and their local communities.

Washington already has plenty of ways to tax Americans—rich and poor alike. Adding a new tax to the financial system is not the way forward—especially when it will hurt American workers, students, and retirees the most.