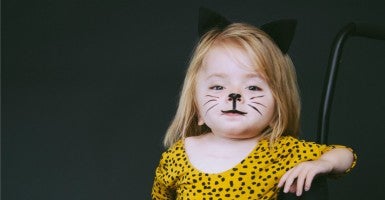 This year, fashion brand Ultra Violet Kids decided to do something a little differently with their Halloween advertising by including a child with a visual disability in their promotional photos for the very first time.

Four-year-old Zoe Lush, a little girl who is confined to a wheelchair, was one of five child models featured in the brand’s advertising.

“[Zoe is] so sweet and funny and had the best time,” Ultra Violet Kids Founder Michelle Chaplin told The Daily Signal. “All the kids loved her and didn’t even notice anything different about her.”

Chaplin says the photo shoot, which had Zoe dress up as a cat in one photo and fashion icon Iris Apfel in another, was “beautiful to watch.”

Since posting the promotional photo to social media, Chaplin has received an overwhelmingly positive response.

“Everyone loves those photos so much,” Chaplin says, adding that a photo of Zoe received “the most ‘likes’ that we’ve ever had [on social media].”

Chaplain argues more companies should include children like Zoe in their ads and that through inclusive advertising a disabled child can feel that there are other people like them in the world.

Major retailer Target has already hopped on board by channeling the popular “Frozen” movie with a new Halloween ad featuring a disabled girl in an Elsa costume.

“They are the only big box store that we know of that actually included the 13% of kids who will wear a costume and happen to be disabled,” says Katie Driscoll, founder of Changing the Face of Beauty.

Driscoll’s organization, on a mission to change public perception of children with disabilities through more diversity in advertising, partners with brands around the world to include disabled models in ads.

Zoe layered up in #ultravioletkidsaw15 up like #irisapfel for our #UVKHalloween15 What are your kids going as?

“Holidays like Halloween where stores are selling seasonal merchandise to kids should keep in mind that 50% of the population has a disability or knows someone with a disability,” Driscoll says, suggesting companies would be wise to adopt similar policies.

“These people are loyal customers and pay attention to companies that represent them.”