Debunking Myths About Banks and the 2008 Financial Crisis 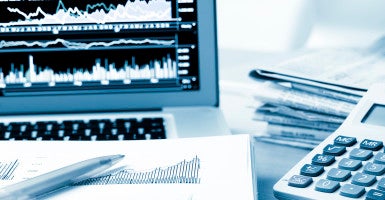 There are many myths about regulations and banks. (Photo: Ldf/iStock)

Between now and the presidential election, we’ll be treated to all sorts of wonderful fables about what caused the 2008 financial crisis and the best way to prevent another one. Most of these stories will rehash the same old spin that we’ve been hearing for years.

The biggest whopper concerns the Glass-Steagall Act, the 1933 law that separated commercial and investment banking. Supposedly, this act made the banking system safe for nearly a century, and then its repeal blew the industry up.

Both parts of this narrative are dead wrong.

For starters, the mingling of investment and commercial banking did not cause the Great Depression or any other type of financial crisis.

The definitive work on this topic is George Benston’s The Separation of Commercial and Investment Banking, published in 1990.

Benston meticulously researched practically every original source of information that exists, and he clearly shows the evidence never supported what Glass-Steagall’s proponents claimed. For instance, Benston concludes (on page 41):

The evidence from the pre-Glass-Steagall period is totally inconsistent with the belief that banks’ securities activities or investments caused them to fail or caused the financial system to collapse.

Thus, the record does not support the belief that the pre Glass-Steagall period was one of abuses and conflicts of interest on the part of banks involved with securities transactions, either directly or through affiliates. Indeed, very little evidence exists of such abuses, and those abuses that the record does describe seem far more prevalent among non-banks.

Evidence rarely matters in the heart of a crisis, though, and stock market speculation has been a political scapegoat since at least the 1600s. Paul Mahoney’s book, Wasting a Crisis, has a great explanation of the real story behind Glass-Steagall. Basically, a legislative bargain was struck among the key players in the financial industry. Everyone—small bankers, Wall Street banks, securities firms—seems to have gotten something.

For instance, during the Roaring Twenties, leading investment banks and their trade group, the Investment Bankers Association of America (IBAA), lobbied hard for “reforms” to help stave off competition from commercial banks. The IBAA cast these competitors—the ones eventually shut out of investment banking—as “high-pressure” sellers engaged in “unfair trade practices.”

As for the 2008 crisis, the notion that the 1999 repeal of Glass-Steagall caused the meltdown is also dead wrong.

To begin, the often cited 1999 Gramm-Leach-Bliley Act (GLBA) didn’t actually repeal Glass-Steagall, it merely amended some of the restrictions.

This distinction is critical, because it means that U.S. law—both before and after the GLBA—forbids insured depository institutions, commonly known as banks, from underwriting or dealing in securities.

What GLBA actually did was remove the Glass-Steagall restrictions on affiliates. That is, post-GLBA, banks can be affiliated with securities dealers. But they’re still separate.

For instance, a bank holding company is allowed to control both a bank and a securities dealer.

So it’s not possible that securities underwriting caused bank failures because of GLBA, much less because of the supposed repeal of Glass-Steagall.

Besides, many of the firms that got into financial trouble—Bear Stearns, Lehman, AIG, etc.—were not banks.

Speaking of AIG, another popular theme is that the so-called shadow banks, the non-bank financial firms, caused the crisis because they were unregulated. It’s popular, but it’s also dead wrong.

AIG, for example, is cited as a main culprit of bringing the financial system to its knees because of how it used credit default swaps (CDS). The incident has forever tarnished the term swap, even though what really helped to bring down AIG were its un-hedged positions and its securities lending activities.

More importantly, AIG was regulated by a (now defunct) federal banking regulator, the Office of Thrift Supervision (OTS), as well as state authorities. One can make the case that AIG was poorly regulated, but not that it was unregulated.

More broadly, swaps are commonly used as an exampleof the kind of risky, unregulated derivatives that were traded in the shadow banking system. If only these mystical financial firms had been regulated, the story goes, we wouldn’t have had a crisis.

The only problem is that they actually were regulated.

It’s true that swaps were not regulated by either the CFTC or the SEC, but the overwhelming majority of these swaps were regulated by state and federal banking regulators. Historically, large banks have always been the heaviest users of interest rate swaps, the type of swap that accounts for more than 80 percent of this market.

What this means is that federal banking regulators, including the Federal Reserve and the Office of the Comptroller of Currency (OCC), constantly monitor banks’ swaps exposure. And it’s not a recent phenomenon.

Even the very first iteration of the Basel capital requirements, implemented in the late 1980s, required banks to account for their swaps when calculating regulatory capital ratios. (Those rules required banks to hold capital against the credit-risk equivalent to their swaps, essentially treating them as loans.)

The notion that these swaps transactions took place in some shadowy, hidden room of finance, where regulators couldn’t have possibly known what was going on, is absolutely false.

Bank management must ensure that credit derivatives are incorporated into their risk-based capital (RBC) computation. Over the near-term, the RBC treatment of a credit derivative will be determined on a case-by-case basis through a review of the specific characteristics of the transaction. For example, banks should note that some forms of credit derivatives are functionally equivalent to standby letters of credit or similar types of financial enhancements. However, other forms might be treated like interest rate, equity, or other commodity derivatives, which have a different RBC requirement.

Just before the recent crisis, a 2006 OCC report stated:

As a result, derivatives activity is appropriately concentrated in those few institutions that have made the resource commitment to operate the business in a safe and sound manner. Further, the OCC has examiners on site in these large banks to evaluate the credit, market, operational, reputation and compliance risks in the derivatives portfolio on an ongoing basis.

Given that this information is widely available on the internet, the perpetuation of this deregulation myth is more puzzling than the “Glass-Steagall made the banking industry safe for decades” myth.

Another popular theme is that the “big” banks need to be broken up.

More troubling is the fact that the failure of many small banks contributed to crises in both the 1930s and 1980s. And there’s no logical explanation for why, just for example, two $100-billion banks pose less risk than one $200-billion bank.

Academics have also had a notoriously difficult time linking bank size itself to risk. There’s far from any sort of consensus.

Hopefully, all of these ideas will soon fade to the background, where they belong.

If we don’t start by acknowledging these facts, we’ll never agree on the best way to guard against another financial crisis.