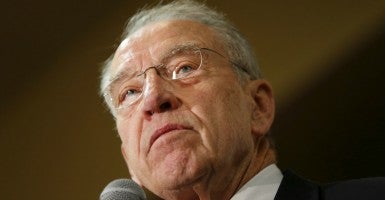 All Republican members of the Senate Judiciary Committee promised Tuesday to block any candidate nominated by President Barack Obama to fill the Supreme Court seat vacated by the death of Justice Antonin Scalia.

In an open letter to Majority Leader Mitch McConnell, the 11 Republican senators said they plan “to exercise our constitutional authority to withhold consent on any nominee to the Supreme Court submitted by this president.”

Under the leadership of Judiciary Chairman Chuck Grassley, R-Iowa, the group effectively has barred any Obama nominee to succeed Scalia from advancing to the Senate floor through the regular process.

After Scalia’s unexpected death Feb. 13, McConnell, R-Ky., and other GOP leaders quickly declared that the Senate should not confirm anyone to fill the seat until after a new president takes office in January.

With the letter Tuesday, the 11 committee Republicans rallied to that position, writing:

Because our decision is based on constitutional principle and born of a necessity to protect the will of the American people, this committee will not hold hearings on any Supreme Court nominee until after our next president is sworn in on Jan. 20, 2017.

They said the current debate doesn’t present “a difficult or novel constitutional question.” As justification, they cited a statement made in 2005 by then-Majority Leader Harry Reid, D-Nev.:

[The Constitution] says appointments shall be made with the advice and consent of the Senate. That is very different than saying every nominee receives a vote.

He said: “Democrats [have] never stopped a Republican [Supreme Court] nominee from receiving a hearing and getting a vote on confirmation. Never.”

In their letter, the Republican members of the Judiciary Committee counter that there’s no modern historical precedent for the Senate to confirm a nominee during a year when the country casts ballots for the next president:

Not since 1932 has the Senate confirmed in a presidential election year a Supreme Court nominee to a vacancy arising in that year. And it is necessary to go even further back—to 1888—in order to find an election year nominee who was nominated and confirmed under divided government, as we have now.

Nine Democrats are on the Judiciary Committee, led by the ranking member, Sen. Patrick Leahy of Vermont.

“The president has already begun consulting with the Senate. After a nomination has been made, we in the Senate must then do our jobs,” Leahy said in a floor statement, adding:

Over the past 10 days, mostly while Congress was in recess, speculation mounted about a fracturing Republican conference when a few less conservative GOP senators said an Obama nominee should receive a committee hearing.

If Republicans ultimately are successful at blocking an Obama nominee, the Supreme Court will operate without a full bench for at least 332 days—more than 10 months.

The eight justices then would not be joined by a ninth until the Senate confirms the nominee of Obama’s successor, who takes office Jan. 20.