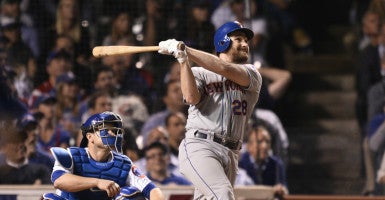 On Wednesday, Daniel Murphy continued his march through the postseason and made headlines by setting a record for hitting a home run in six consecutive postseason games, winning the National League Championship Series (NLCS) Most Valuable Player award, and helping the New York Mets complete its sweep of the Chicago Cubs to send the team to the World Series. It now awaits the winner of the American League Championship Series between the Kansas City Royals and the Toronto Blue Jays.

Last year, Murphy was making headlines for a different reason. As I wrote in June of 2014, Murphy had drawn the ire of the New York media because he had the audacity to miss the first two games of that season to witness the birth of his son. His teammates and the Mets organization supported his decision.

Earlier this year, he made headlines again for sharing his religious beliefs. As my colleague Katrina Trinko wrote at the time, “[w]hy is the nation even discussing what Murphy, a second baseman for the New York Mets, thinks about gays and lesbians?”

That was enough for the Mets. The organization told Murphy that he was allowed to talk about only baseball in the media. It was probably a breath of fresh air for a baseball player, but there are things that mean a lot to Daniel Murphy, and he’s not shy about sharing them.

Ironically, on the American League side, Royals second baseman Ben Zobrist is also very outspoken about how important his family is to him. During the American League Divisional Series (ALDS), his (very pregnant) wife sang the national anthem. He disclosed that he has never been away from his family for more than six days, and his wife gave up record deals so he could live his dreams. They plan to reverse roles once his playing days are through.

In this day and age, where family is seen as less and less important, it is nice to see players getting positive coverage because of their play on the field and their attitudes off the field. Murphy has already punched his ticket to the World Series, and Zobrist is one win away. If they’re both there, I can guarantee that their families will be, too.