Boehner’s D.C. School Choice Program Passed by House: ‘We Owe the Kids in This City a Chance’ 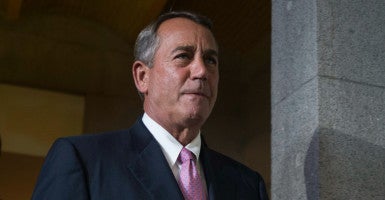 The D.C. Opportunity Scholarship Program provides students in Washington’s struggling school districts with federally backed vouchers to attend a private school of choice. The House confirmed its reauthorization Wednesday evening in a near party-line vote of 240 to 191.

“This issue is personal to me, and it has been for a long time. But frankly, it ought to be personal to everyone in this chamber,” Boehner said during a floor speech as he fought back tears.

Boehner, the product of Catholic school, helped begin the program in 2003 while he served as chairman of the House Education and the Workforce Committee. The program has operated as an alternative for parents who can’t afford to transfer their kids out of a failing school district to a more effective private school.

Over the past 10 years, more than 6,100 inner-city students have used the vouchers to “escape underperforming schools,” Boehner noted.

Proponents boast data finding that among those enrolled, 90 percent graduated from high school, and 88 percent of the class of 2015 moved on to pursue higher education. The average annual household income of the students enrolled falls around $20,575.

Lindsey Burke, a fellow in education policy at The Heritage Foundation, previously told The Daily Signal the program marks a “beacon of education success” that has allowed other states to pursue similar school choice options.

“You’d be hard-pressed to find many other education programs that can deliver those types of outcomes,” Burke said.

The $45-million program has faced Democratic pushback since its inception and will likely surface in the ongoing school choice battle between Republicans and President Barack Obama this fall.

In anticipation of the program’s reauthorization, the White House issued a statement Tuesday reaffirming the administration’s “strong” opposition, but held back a veto threat.

The president has attempted to defund the program every year, aligning with Democrats who argue that the scholarship funnels money out of D.C.’s public schools system.

The program’s extension still has to make it through the Senate, but Democratic heavyweights Cory Booker of New Jersey and Dianne Feinstein of California have already pledged their support.