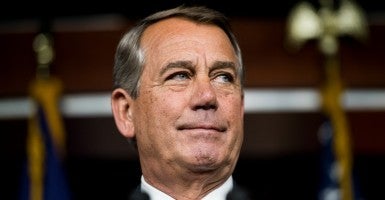 House Speaker John Boehner has invited 10 students from Washington, D.C.’s inner-city Catholic schools to join the thousands expected to pour onto the Capitol’s West Lawn to see Pope Francis Thursday after his historic address to Congress.

The students shared their excitement for the Pope’s brief address in the speaker’s Wednesday press release, noting his influence on their faith and work with the poor and homeless.

Prior to becoming speaker of the House, Boehner chaired the House Education and the Workforce Committee, where he helped craft a scholarship program to give low-income students the opportunity to attend a private school of choice.

Boehner, who attended Catholic school himself, helped create the D.C. Opportunity Scholarship Program as an alternative for parents to transfer their kids out of a failing school district into an often safer and more effective private or religious school.

Lindsey Burke, a fellow in education policy at The Heritage Foundation, said the program has been a “beacon of education success” in Washington that has “lit the way” for states across the U.S. to pursue a school choice option.

Since it began in 2003, the program has offered more than 6,100 scholarships worth up to $12,500 to low-income students, giving them a chance to move out of their underperforming assigned districts.

A random assignment evaluation of the program found that there were significantly higher graduation rates among those students who received the vouchers, according to the Department of Education.

“You’d be hard-pressed to find many other education programs that can deliver those types of outcomes,” Burke said.

Democrats, including President Barack Obama who has attempted to defund the program each year, argue the scholarship funnels money out of the district’s public school system.

Despite the pushback, Burke said “congressional champions” like Boehner have kept the program alive, “ensuring D.C. children will continue to be able to access quality educational options that are safe, effective, and right for them.”