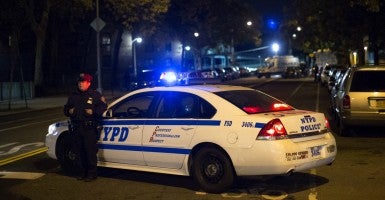 New York Police block the scene where the shooting of Officer Randolph Holder occurred in the Manhattan borough of New York, Oct. 21, 2015. Holder was shot and killed late on Tuesday while pursuing a suspected armed robber close to a busy road in the city's East Harlem neighborhood, police said on Tuesday. (Photo: Andrew Kelly/Reuters/Newscom)

Not too long ago cops were seen by most as heroes deserving our respect and gratitude (picture the moments after 9/11). But recent incidents, such as yesterday’s killing of a New York City police officer, have left officers feeling like they are under siege.

An increase in crime from a “Ferguson Effect” might be making all of our communities less safe as police officers struggle to do their jobs within the current climate.

So how should we address this looming crisis in policing?

As police chiefs around the country look for solutions, a veteran top cop just might have the answers.

In his recent book, “Vigilance: My Life Serving America and Protecting Its Empire City” two-time NYPD Police Commissioner Ray Kelly describes how he successfully confronted the twin challenges of crime and terrorism.

During Kelly’s twelve-year tenure 9,500 fewer people were murdered than in the preceding period and NYC had the lowest murder rate of any major U.S. city.

While many factors likely contributed to the crime decline, Kelly is a strong believer that police tactics played a significant role and he makes a convincing case.

“Stop and frisk,” as critics labeled the policing tactic would become a defining characteristic of Kelly’s tenure. (Kelly better describes the tactic as “street inquires…or, at most, stop, question, and sometimes frisk”).

Kelly is an attorney and a civil libertarian who strongly believes the practice was an essential tool to enforce the law in New York City. He confronts those who mischaracterized it – including a sitting district court judge and the now mayor of New York City, Bill de Blasio.

Kelly went so far as to commission an independent study of the program—which confirmed the program did not target minority populations. Unfortunately the judge and de Blasio did not let the facts overcome their biases.

The judge would not allow the study to be admitted as evidence and de Blasio used his false narrative about the program to gain the votes he needed for the mayoral election.

When the appellate court subsequently reprimanded the judge and blocked her decision, de Blasio was unfazed. Soon after he took office the mayor abandoned the appeal that the city would have almost certainly won. In doing so, Kelly lamented:

“De Blasio shrugged and walked away from a routine and useful policing tool, snatching law enforcement defeat from the jaws of legal victory. People will lose their lives as a result.”

Of course, sometimes there are legitimate grievances against the police. When I privately asked Kelly about recent police misconducts, the former commissioner reminded me that every profession has a few bad apples and the goal should be to weed them out.

And if an officer violates the public’s trust then the onus is on the department’s leadership to take decisive action.

As Kelly describes in his book, when an officer shot and killed an unarmed citizen the commissioner did not wait for internal investigations to be complete to render his own public judgment that the shooting was unjustified. This was much to the dismay of the police union, but he was operating in what he felt was the public’s best interest: to call it like he saw it.

Kelly’s efforts to enhance policing in NYC were not limited to crime fighting; he took a similarly proactive approach for NYPD’s counterterrorism efforts.

Following 9/11 federal law enforcement agencies were keenly focused on terror threats. Kelly highlights that while he worked in earnest with the Feds, he had a responsibility to protect the citizens of New York in a way that he felt that FBI would never be able to achieve. He launched a world-class counterterrorism and intelligence apparatus that focused exclusively on safeguarding the city and its residents. Kelly acknowledges that creating this capability—unique among U.S. cities—may have occasionally caused tensions with federal authorities, but it’s clear that assigned primacy to NYC citizens, rather than bureaucratic scuffles. His passion is hard to question.

Today if you walk up to Freedom Tower you’ll face its hulking 200-foot base of steel-reinforced concrete on which the 70-story building rests. The imposing structure sends an unmistakable message of “never again” to anyone seeking to attack the American icon.

But it almost wasn’t so. The building façade was to be glass, and its atrium open, vulnerable to repeat history. Kelly intervened and successfully appealed to harden the structure and create appropriate standoff distance from busy streets. Thus it’s not an overstatement to say that Ray Kelly shaped NYC’s post-9/11 landscape in a way that will deter future attacks.

Now with the mayor of New York rolling back the police tactics Kelly spearheaded and officers across America feeling the weight of recent controversies, we risk returning to the cities of yesteryear, vulnerable to crime waves and terror attacks.

Alternatively, as Kelly suggests, we could choose to empower those who have sworn to protect us and ask them to remain vigilant in our defense.