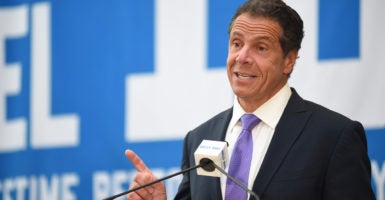 New York Democratic Gov. Andrew Cuomo is willing to offer state help to the New York Daily News after nearly 50 percent of the editorial staff was laid off Monday.

Cuomo asked Tronc Inc., which owns the newspaper, to reconsider the decision as it hurts “a New York institution and one of our nation’s journalism giants,” according to the statement made Monday. The statement added that New York state was willing to offer aid, though the amount of financial help was not specified.

My statement on the layoffs at the @NYDailyNews: pic.twitter.com/R1FflH98DX

“These layoffs were made without notifying the State or asking for assistance,” the statement said on Monday. “My father, as governor, came to the aid of the New York Post when it was facing difficult financial times. Even though the Post represented an opposing active partisan interest, my father understood the value of a robust free press. So do I.”

The statement came after the New York Daily News downsized its newsroom to focus on breaking news talent. The news organization had around 85 employees before the layoffs, the New York Post reported.

Laid-off staffers will be paid for 90 days and are also eligible for transitional benefits after as part of the severance package.