‘I Was Not Disrespectful,’ Student in National Mall Incident Says 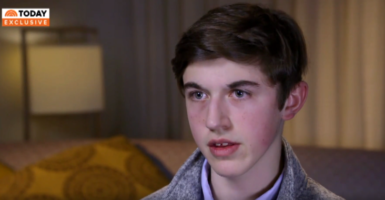 “As far as standing there, I had every right to do so,” Nick Sandmann, 17, tells Savannah Guthrie of “Today,” speaking about the incident captured in a viral video clip. (Photo: Screenshot via “Today”)

The high school student at the center of a media firestorm over an incident near the Lincoln Memorial says he didn’t mean any disrespect to a Native American activist who approached him and fellow students while beating a drum.

“As far as standing there, I had every right to do so,” Nick Sandmann of Kentucky told Savannah Guthrie on NBC’s “Today” during an interview that aired Wednesday about his apparent altercation with Nathan Phillips in the nation’s capital Friday.

“My position is that I was not disrespectful to Mr. Phillips. I respect him. I’d like to talk to him,” Sandmann, 17, said.

Sandmann is a junior at Covington Catholic High School in Park Hills, Kentucky. He and other students from the school, most of them white boys, faced harsh criticism on mainstream and social media based on a video showing a portion of their encounter with Phillips, 64, on the National Mall.

In the video, Sandmann and some of the other boys are wearing red “Make America Great Again” caps. Sandmann stands smiling, facing Phillips as he beats a hand drum and chants just inches away.

“People have judged me based off one expression, which, I wasn’t smirking, but people have assumed that’s what I have,” Sandmann told Guthrie.

The student said his school group, in Washington to attend the March for Life earlier that day, was verbally attacked by some in a group called the Black Hebrew Israelites.

“I heard them call us incest kids, bigots, racists,” Sandmann said, and Phillips reportedly got involved, perhaps beating the drum to de-escalate the tension.

Officials at the Catholic school do not tolerate racism, he said.

“I mean, in hindsight, I wish we could’ve walked away and avoided the whole thing. But I can’t say that I’m sorry for listening to him and standing there,” Sandmann said.

Jim Wilson, a chaperone who accompanied the Covington Catholic High School students to Washington, said Tuesday night on Fox News Channel’s “Tucker Carlson Tonight” that the students “started doing their school cheers to kind of offset the noise that was being presented to them while they were waiting for the bus.”

Wilson said the whole school has felt the weight of the media mischaracterization of the actions of Sandmann and his fellow students.

“Right now we’re all hurting. We don’t like what has happened to our sons, to the boys that we’ve watched grow up, be attacked like this,” Wilson said.