Paul Ryan Gives Republicans an Ultimatum in Run for Speaker 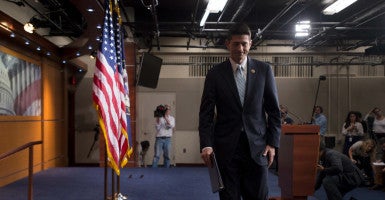 Rep. Paul Ryan, R-Wis., announced Tuesday he will run for speaker of the House if the entire GOP conference promises to unite behind him. (Photo: Michael Reynolds/EPA/Newscom)

Rep. Paul Ryan put conservatives of the House Freedom Caucus in a challenging position Tuesday when he announced that he will run for speaker only if the entire GOP conference unites behind him.

Getting ahead of any possible conservative-led rebellion that could derail his bid for the speakership, the Wisconsin Republican wants assurances from different GOP factions that they will stand by him—both to help elect him speaker and to make his job smoother if he were to win.

While it’s unclear how the 40-member Freedom Caucus will react to Ryan’s demands, the conservatives who helped push out Speaker John Boehner, R-Ohio, have been clear in their expectations.

“I don’t think anybody would be above what we think are the minimum standards necessary for speaker,” Rep. John Fleming, a Freedom Caucus founder, told The Daily Signal before Ryan’s announcement.

“While he is well-liked and well-respected, this proposition that somehow the conference drafts him and he accepts under the condition there are no conditions … that would be a huge mistake. We don’t take anyone unconditionally. That’s not how this place runs.”

Those conditions include a return to “regular order,” a process by which bills go through committee first, and votes occur separately on the 12 appropriations bills instead. Regular order also entails an open amendment process.

Ryan, who said he will make a decision within the week, laid out an agenda that would seem to mesh with some of the conservatives’ demands.

In a statement his office put out Tuesday night, Ryan said, “[W]e need to update our House rules so that everyone can be a more effective representative.” The Freedom Caucus has made clear its desire to see through process changes in the House that would give more power to rank-and-file members.

But in a line likely directed at the Freedom Caucus, Ryan urged members not to change the rules “for one group.” A reluctance to bow to Freedom Caucus demands pushed another speaker front-runner, Rep. Kevin McCarthy, R-Calif., to withdraw from the race.

“We need to do it as a team and it needs to include fixes that ensure we don’t experience constant leadership challenges and crisis,” Ryan said in his statement, alluding to the fact that he would like assurances that conservatives or other groups would not try to oust him as speaker if they were to disagree with him.

Fleming hinted there’d be room for flexibility for Ryan, and that it would be difficult to expect him to do everything they want.

“No one in our camp is saying you need to do everything we ask you to do,” Fleming, R-La., said. “We didn’t do that to McCarthy. We didn’t give McCarthy any type of ultimatum. But if Ryan does want the job, we have a right to have a voice on what the process is going to be. Otherwise, we take our votes somewhere else.”

Ryan met briefly with Freedom Caucus board members before making his announcement. Freedom Caucus members said Ryan made no specific promises in that meeting.

And afterwards, members reiterated that they were still standing behind Rep. Daniel Webster, an underdog from Florida the group previously endorsed. Webster has vowed to remain in the race even with a Ryan run.

The other only declared candidate, Rep. Jason Chaffetz, R-Utah, announced he will drop out of the race in a show of support for Ryan.

Prior to Tuesday’s meeting, Freedom Caucus members told The Daily Signal they are focused on process changes rather than personalities. Ryan has come under scrutiny from conservatives for his views on immigration reform and the 2008 financial bailout, but those issues are secondary to his willingness to push for rules changes in the House.

“Paul has one hurdle to clear: to convince people he would run the conference in a different and more fair way than Boehner,” Rep. Mick Mulvaney, a Freedom Caucus founder, told The Daily Signal last week.

“We all respect him and think very highly of him and think he can unify the conference. I would be excited about Paul Ryan saying he wants to be a reform speaker. But if he doesn’t engage us, we have a problem.”

In addition to requiring the endorsement of the Freedom Caucus before running, Ryan also said he will seek commitments from the approximately 50 members who make up the moderate Tuesday Group as well as the Republican Study Committee, a caucus of more than 170 conservative members.

Ryan, the party’s vice presidential nominee in 2012, also set forth a few other conditions, including that he wants to remain a family man and to delegate some typical speaker responsibilities like fundraising to other GOP members.

“My family commitments come first,” Ryan said. “I have left this decision in their [his GOP colleagues’] hands.”