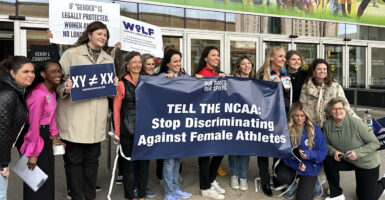 An organization of female athletes sent a letter Thursday to the National Collegiate Athletic Association, demanding that the NCAA reverse its policy of allowing male athletes who identify as women to compete on women’s teams, or face legal action.

A group of current and former collegiate and professional female athletes also protested Thursday outside the NCAA convention in San Antonio, after the Independent Council on Women’s Sports, or ICONS, sent the letter.

Democrats and the administration of President Joe Biden have argued that Title IX of the Education Amendments of 1972, which bars discrimination on the basis of “sex” in college athletics, mandates that schools must allow males who claim to identify as female to compete in women’s sports.

Marshi Smith, a co-founder of ICONS who became a six-time All-American in 2005 by winning the NCAA championship in the 100 backstroke, told The Daily Signal that she and her allies are advocating “the original intent of Title IX” against Biden’s attempt to undermine it by redefining “sex” as gender identity.

“We are advocating for the original intent of Title IX as written 50 years ago that ensures women are not discriminated against on the basis of sex,” Smith said in an email statement. “The Biden administration’s efforts to equate sex with gender identity undermine all sex-based protections for women.”

“We cannot rob our daughters of the chance to be champions in this generation or the next,” she concluded.

“We write as attorneys on behalf of the Independent Council on Women’s Sports (ICONS), a network of current and former collegiate and professional women athletes and their families, to put you on official notice that your practice of allowing male athletes on women’s teams constitutes illegal discrimination against women on the basis of sex,” the lawyers wrote. “We hereby demand that you take direct and immediate action to establish rules to keep women’s collegiate sports female.”

The lawyers argue that “in the world of college sports, it is impossible to provide equal opportunities for both sexes (as required by Title IX) without female-only teams. Yet the NCAA implements and perpetuates a policy of allowing male athletes on women’s teams, even as sports governing bodies and federal courts increasingly reject these unjust and inequitable policies that exclude young women from their own teams.”

Current NCAA volleyball player Macy Petty, also an ambassador with Young Women for America, spoke at the San Antonio protest along with Smith.

“I am one of the thousands of female athletes the NCAA has turned its back on in the name of ‘inclusion,’” Petty said. “The NCAA has forsaken our safety and opportunity to compete on an equal playing field to cater to the desire of a few.”

Petty recounted her own personal sacrifices to excel in sports. “I was that girl in high school who never got to go to prom, was constantly traveling to volleyball tournaments, and had to sacrifice a lot of my social life to compete and get recruited,” she said. “I represent the thousands of women who have worked their whole life to achieve the dream of playing volleyball with a scholarship.”

The NCAA’s policy had a concrete impact on Petty. She recalled a volleyball game that was attended by “dozens” of scouts and was “one of the few opportunities you have to make your mark.” Unfortunately, a biological male was playing on the other team.

“He was so tall, with a vertical leap that made us look silly,” she said. “There was no way for us to stop him. He took the game over—and wooed the scouts.”

Doreen Denny, a senior adviser at Concerned Women for America, also spoke at the rally.

Turning to the NCAA, Denny declared, “Shame on you for exalting males in women’s sports at the expense of female athletes.”

Many noteworthy female athletes attended the rally in San Antonio, including Riley Gaines, a former two-time NCAA All-American swimmer who tied for fifth place against Lia Thomas, the University of Pennsylvania swimmer who represents himself to be female and won the NCAA Division I Championship last March.

Those attending the rally also included Adriana McLamb, a former NCAA volleyball player from Florida International University and current Team Florida All Star coach; Kim Jones, a former All-American tennis player, mother of an Ivy League swimmer, and co-founder of ICONS; Blake Allen, a Vermont high school volleyball player who had to compete and share a locker room with a male who claimed to identify as female; and Nancy Hogshead-Makar, a three-time Olympic champion and silver medalist and CEO of Champion Women.

On the other side of this issue, Iszak Henig, a biological female who identifies as a man, joined the men’s swimming team at Yale after concluding last year’s season as an All-American swimmer on the women’s team. Henig has taken hormones for eight months. In a November meet, she finished—predictably, some might argue—in 79th place out of 83 swimmers.

The NCAA did not respond to The Daily Signal’s request for comment.