Sanctuary Cities on the Rise, Releasing More Than 9,000 Criminals in US Illegally 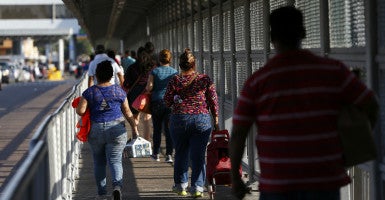 Immigrants make their way to Mexico as they cross the Gateway to the Americas International Bridge at the U.S.-Mexico border near Laredo, Texas. (Photo: Aaron M. Sprecher/UPI/Newscom)

The number of sanctuary cities in the United States has risen to 340, resulting in the release of roughly 1,000 detained illegal immigrants each month despite objections from the federal government, according to a new study.

The Center for Immigration Studies, a nonprofit organization that advocates for decreased immigration, reported that local authorities acting in these sanctuary cities released more than 9,000 illegal immigrants whom the government was seeking to deport last year.

The majority of those shielded from ICE had prior felony charges or convictions, including rape, battery, and drug violations, the analysis of U.S. Immigration and Customs Enforcement data from January to September 2014 found.

Jessica Vaughan, the center’s director of policy studies and the author of the report, said she was surprised by the “sheer number” of criminal offenders who are continuing to be released because of sanctuary policies.

Those protections vary across the U.S., but they generally bar local law enforcement from asking federal authorities the immigration status of criminal suspects, allowing those localities to sidestep ICE demands.

“You would think that these jurisdictions would recognize what a public safety hazard they’re creating with these policies, but clearly public safety is not the primary concern—it appears to be the political benefit that they think they’re getting from this,” Vaughan said.

“Cities that actively work to shield illegal immigrants, especially those with a criminal record or those charged with a crime, do themselves no favors and only hurt their communities,” he said.

Because those jurisdictions are not going to “fix themselves” and the Obama administration remains inactive, Vaughan said, action falls on Congress.

The Senate is moving to vote on legislation next week that would withhold federal funds from cities that refuse to cooperate with federal immigration officials. The White House already threatened to veto legislation that cracks down on sanctuary cities after the House passed a similar bill in July.

Vaughan said the issue would be improved even if Congress can pass only narrowly focused sanctuary legislation, but she added that broader action is needed to “restore the enforcement that has been dismantled by the Obama administration.”

Sanctuary cities grabbed national attention last summer after Kate Steinle, a 32-year-old woman from San Francisco, was fatally shot by an illegal immigrant who had seven prior felony convictions in the U.S. and was previously deported to Mexico five times.

Given the string of “horrific” crimes committed by similar offenders last summer, Vaughan said she was “shocked” that the number of sanctuary jurisdictions had increased and not fallen off.

This story was updated to clarify Vaughan’s quote about the Obama administration’s dismantling of immigration enforcement.