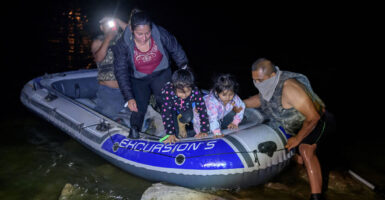 Illegal immigrants who pay cartels to help them cross illegally into the U.S. are considered by the cartels “contraband units” that must be moved across the border, not valuable human beings. Injured immigrants are often left for dead by cartels. Pictured: Migrants from Ecuador, arriving illegally from Mexico, disembark from an inflatable boat after crossing the Rio Grande on March 29. (Photo: Ed Jones/AFP/Getty Images)

Biden’s neglect of border security is feeding the money-making machine of the Mexican cartels, a criminal enterprise that exploits immigrants by taking their money—and sometimes their lives.

“[The cartels] have the northern border of Mexico sealed,” Jay Whetten, a rancher residing in Cochise County, Arizona, told me in an interview. “Nobody comes through that border illegally without their authorization.”

In May 2021, Border Patrol encounters with illegal immigrants from the Mexican border increased 674% as compared to May 2020, demonstrating the magnitude of the increase in business for Mexican cartels. And, according to a veteran Department of Homeland Security law enforcement officer, these are only the crossings of which Border Patrol is aware.

The officer, who wished to remain anonymous, has extensive border experience and estimates the number to be 20% higher. He told me in an interview, “The cartel makes more money on people than they do on dope.”

For illegal immigrants, working with the cartels is their only option. According to Dan Cantu, a recently retired Border Patrol agent, no one “freelances”—or crosses into the U.S. from the Mexican border without cartel permission. In most cases, those who try are instantly killed.

“They call those [who cross on their own] ‘chapulines’ … which means grasshoppers in Spanish,” Cantu told me in an interview. “It’s common knowledge that the minute they try to freelance—as soon as they do—smugglers and recruiters [for the cartels] will notice … [and] they’ll flat out kill them.”

According to Cantu, cartel scouts oversee certain zones or corridors of the border. They patrol ridge lines and mountains in search of “chapulines” walking on their own. If found, the chapulin is approached by a scout and asked for a code. Those who don’t know the code, Cantu told me, are often tied to a tree and beaten, raped, or killed by cartel operatives.

“The chapulines experience all kinds of torture,” Cantu emphasized, “because [the cartels] have got to send a message … there is a price for attempting to traverse the border yourself.”

The message, says Cantu, is clear: “Do not attempt to do this yourself.”

Cantu gave a chilling example of how the cartels punish “chapulines”:

I debriefed a smuggler who said, ‘If you go up to a certain mountain, you’ll find seven bodies.’ In this case, the bodies were [freelance] drug smugglers [killed by the cartel].

The [cartel] left the [marijuana] bundles with the chapulines and put a tag on [their bodies] that said, ‘Por ser chapulin’—‘for being a chapulin.’ They didn’t even care about [taking] the marijuana.

The message was: ‘Do not do this, you will die and it isn’t worth it.’

‘Por ser chapulin’ on a little sign pinned to his chest. All the other drug smugglers that use that particular trail would see that. It’s a strong message … it’s a pretty strong message.

Chris Farrell, director of investigations and research at Judicial Watch, explained to me in an interview how the cartels’ control of the Mexican border is driven by profit and dehumanizes the people they traffic. Farrell, a former Army counterintelligence officer, has over 18 years of experience investigating the U.S.-Mexican border, including a narco terror plot against Chicago launched from Juarez, Mexico.

“When Americans hear about the humanitarian crisis at the border,” said Farrell, “they should remember that it is fueled by a sophisticated criminal enterprise that is subsidized by the Biden administration’s failure to secure our border.”

Joaquin “El Chapo” Guzman, former head of the Sinaloa Cartel, was listed in Forbes magazine as one of “The World’s Most Powerful People” from 2009 to 2014 and in Forbes “World’s Billionaires List” in 2012. “The Mexican cartels have a valuation greater than Walmart,” said Farrell. “They are not a bunch of thugs hanging out in a trailer someplace.”

As Farrell explained, illegal immigrants who pay cartels are considered “contraband units” that must be moved across the border, not valuable human beings.

“Once they cross the border… humans are a commodity that are expendable. If they die in the desert, the ‘coyotes’ won’t be held accountable,” Farrell said. “Let’s say an alien is injured and can’t continue. They will leave them to die in the desert. A coyote would never leave a bundle of drugs out in the desert.”

This is corroborated by Arizona rancher John Ladd, who told me he has found 14 dead bodies on his property, which runs along the border wall—bodies of immigrants who crossed illegally into the U.S.

Illegal immigrants by the thousands are risking their lives daily to cross into the U.S., with the “help” of a brutal criminal enterprise, rather than through a safe and legal process. This is the direct result of foolish and deliberate choices made by Biden.

The Biden administration’s reversal of Trump-era border policies—despite its false narrative of “humane” immigration—has given Mexican cartels an enormous opportunity to exploit immigrants for financial gain. This criminal and inhumane system is a direct consequence of Biden’s open-door policies and willful neglect of border security.