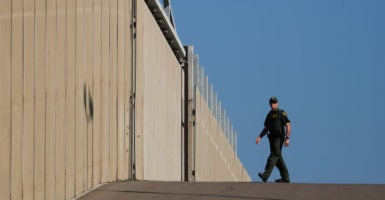 An illegal immigrant arrested for allegedly shooting and killing a co-worker in Oregon is discovered to have been deported at least eight times.

Deciderio Vargas-Ortiz, 52, was arrested for the alleged murder of Renee Luis-Antonio. The two worked together at a creamery in Milton-Freewater, Oregon—a town in the northeastern part of the state—and reportedly had a long-running dispute. Investigators believe Luis-Antonio was shot on Nov. 26 while riding a tractor.

Officers were able to locate and arrest Vargas-Ortiz a day after the alleged shooting. The suspect had fled to Washington state, where a SWAT team apprehended him in a local hotel.

As it turns out, not only was Vargas-Ortiz residing it the U.S. illegally, but he had already been deported back to his home country of Mexico at least eight times, according to a statement from an immigration spokeswoman. The suspect had also been operating under an alias—his real name being Antonio Vasquez Vargas.

“ICE lodged a detainer with the Benton County Jail on Antonio Vasquez Vargas, aka Deciderio Vargas Ortiz, a citizen of Mexico illegally present in the U.S., after he was arrested on local charges,” Tanya Roman, a public affairs officer for U.S. Immigration and Customs Enforcement, said in a statement to The Daily Caller News Foundation.

“ICE has removed him from the U.S. on at least eight prior occasions. On March 15, 2004, Vasquez was convicted in U.S. District Court for violation of 8 USC 1326(B)(2) Aggravated Felon Re-Entry After Deportation and was sentenced to 39-months incarceration,” Roman continued.

Vasquez Vargas is currently being held in the Umatilla County Sheriff’s Office. The jail’s website reports he is being charged with one count of murder, one count of felon in possession of a weapon, and one count of INS detainer. His bail has been set at $5,000,000.