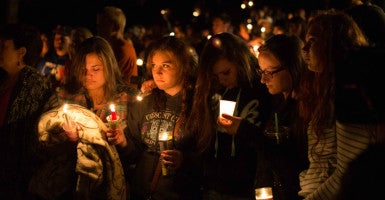 'We are UCC': Hundreds gather for a vigil Oct. 1 after the mass shooting earlier that day at Umpqua Community College in Roseburg, Ore. (Photo: Spenser Sutherland/Polaris/Newscom)

People Magazine issued its version of a “call to action” on gun control today, less than a week after a 26-year-old gunman killed nine and wounded nine others at an Oregon college before fatally shooting himself.

People’s editorial director, Jess Cagle, published an editor’s letter about the massacre at Umpqua Community College and other mass shootings in America. In it, Cagle suggests that readers call their senators and representatives about “gun violence.” The magazine also lists every member of Congress and contact information.

“We need to know that our representatives in Washington, D.C., are looking for solutions and not giving up, and they need to know if we agree or disagree with their strategies,”  Cagle writes.

Cagle refers to President Barack Obama’s remarks on the UCC shootings last Thursday, writing: “As President Obama said, our responses to these incidents—from politicians, from the media, from nearly everyone—have become ‘routine.’”

Cagle says Americans should ask themselves: “How could it happen again? What are we doing about gun violence in America?”

Cagle appears to argue for passing more stringent gun laws as well as shifting the focus to mental health issues. People thrives on covering movies, music, and other pop culture, and its editorial director admits that a cultural celebration of violence contributes to the situation.

He cites statistics from the Gun Violence Archive counting more than 10,000 gun-related deaths in the United States so far this year.

Gun Facts, an organization dedicated to “debunking common myths about gun control,” released a graph showing that from 1973 to 2009, the total property crime rate decreased as the handgun supply increased. It cites the U.S. Bureau of Justice Statistics.

A new National Rifle Association report tackles a claim from a 1994 survey cited by Obama in 2013.

“The claim that 40 percent of gun sales do not go through a federal background check is false,” the NRA said, “and comes from a decades-old survey that has been widely debunked.”

Two major newspapers, the Richmond Times-Dispatch and the Washington Post, both concluded that the claim is false as well, the NRA noted. The gun owners’ group also said the 21-year-old survey sampled only 251 gun owners. It went on to say:

According to the Bureau of Justice Statistics, the vast majority of criminals in state prison for gun crimes get guns through theft, on the black market, from a drug dealer or ‘on the street’ Less than one percent get guns from gun shows.

>>> Re-edited and updated to include research from Gun Facts and the National Rifle Association.