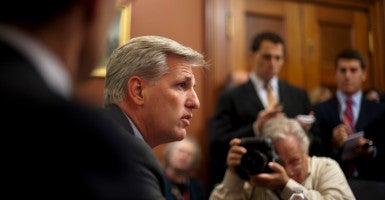 House Majority Leader Kevin McCarthy is dubbed the front-runner in the race for speaker. But, conservatives warn, he doesn't have the nomination locked up. (Photo: Pete Marovich/Zuma Press/Newscom)

Majority Leader Kevin McCarthy, the front-runner for House speaker, is working to lock up support from colleagues before Republican lawmakers vote tomorrow, but a group of conservatives hints that the race for the top spot is far from over.

At the monthly Capitol Hill gathering Conversations with Conservatives, lawmakers expressed skepticism over whether McCarthy, currently the House’s No. 2 Republican, would be elected speaker. They said other candidates could jump in the race between tomorrow’s private vote within the Republican conference and the Oct. 29  floor vote by the full House.

“There’s no way you can vote for McCarthy and go back home and tell your constituents you did the best thing for them,” Rep. Thomas Massie, R-Ky., said. “His comments [about Benghazi] disqualified him not just as speaker, but as majority leader.”

>>> In Blow to McCarthy,  Key Group Gives Nod to Webster for Speaker

Since Speaker John Boehner of Ohio announced he would step down from Congress effective Oct. 30, Republican candidates to replace Boehner have worked to convince colleagues to elect them to the top Republican spot. A candidate must secure 218 votes to win.

After Boehner’s announcement, McCarthy, of California, and Rep. Daniel Webster of Florida threw their hats in the ring. Rep. Jason Chaffetz, R-Utah, joined the race this past Sunday.

The House Republican Conference is set to choose its nominee for speaker Thursday in a private ballot. The preferred candidate needs only a majority of Republican votes—124—to become the nominee.

But to win the position, that candidate also has to secure a majority of the entire House, or 218 votes, on the floor during a public vote Oct. 29.

Despite reports that the House Freedom Caucus—a powerful group of 40 or so conservative lawmakers that in effect has veto power over the election—would vote individually, Rep. Jim Jordan, R-Ohio, repeatedly said the group’s members would decide together whom it would support for speaker and vote as a bloc.

“We have every intention of voting together,” Jordan, the group’s chairman, said. Although the Freedom Caucus has not yet announced whom it will rally behind, comments McCarthy made on Fox News regarding the House Select Committee on Benghazi prompted some conservatives to worry that the Californian may not be fit to serve as the top Republican.

Massie, who is not a member of the Freedom Caucus, said the majority leader is “not an option” for speaker. Massie said conservatives were more likely to oppose McCarthy during a recorded floor vote, because they could be held accountable by constituents.

“More on the floor would vote against [McCarthy] than in conference,” Massie, who backs Webster, said yesterday after conservative lawmakers interviewed the three speaker candidates.

“It is easier to [vote for McCarthy] in a secret ballot behind closed doors than in public,” Massie said. “It’s not a vote I am going to take.”

Rep. Raúl Labrador, R-Idaho, meanwhile, questioned whether McCarthy’s Benghazi comments would hurt him but contended that McCarthy had apologized.

“There’s no question that what [McCarthy] said was inartful, it was wrong. He has apologized,” Labrador said. “I think it does put into question whether he’s going to continue. One gaffe doesn’t make me not want to vote for somebody.”

>>> Early Boehner Opponent in House Gets Vote of Confidence From Home

Four conservatives caucuses, including the House Freedom Caucus and Tea Party Caucus, gathered at the Capitol Hill Club last night to interview the candidates for speaker. Lawmakers speaking today—many of whom attended last night—did not discuss whether they had come to a consensus on who to support.

But they did agree that the race is fluid and suggested that there are likely to be other candidates who jump in before Oct. 29.

We’re still talking and this thing is fluid. Five days ago there were two people in the race, today there are three. This thing is fluid. You don’t know what’s going to happen. We’re still discussing this race and if we vote as a group, we have more of the ability to influence the decision than if we don’t.

Rep. Justin Amash, R-Mich., who has argued that the speakership is a “process position,” pointed to the floor vote as the most vital.

“The vote that matters is the vote on the House floor. That’s the constitutional vote,” Amash said, adding:

McCarthy’s candidacy set in a motion a chain of Republicans announcing their candidacies for seats among Republican leadership, as McCarthy’s post could be left vacant should he assume the speakership, as well as those beneath him.

Josh Siegel contributed to this report.