Yes, the Benghazi Committee Has Been Important 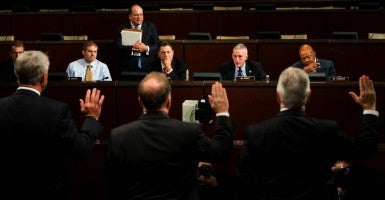 Critics of the House select panel probing the Benghazi attacks, and the news media in general, have had a field day as the committee concluded its 72nd week in session — overtaking the 1973 Senate Watergate investigation as the longest-running special committee in congressional history.

The ranking Democrat on the Select Committee on Benghazi,  Rep. Elijah Cummings, D-Md., has called the panel “a political punchline.”

The clock is ticking down on former Secretary of State Hillary Rodham Clinton’s testimony before the Benghazi committee, scheduled for Oct. 22.  Some have a vested interest in making a joke of the methodical investigation by Chairman Trey Gowdy, R-S.C., of the deadly 2012 terrorist attacks on the U.S. consulate and a nearby government building in Benghazi, Libya.

However, had the news media done its job after the attacks, and had the Obama administration shown a spirit of openness and taken responsibility for the four American lives lost in Benghazi—including Ambassador Christopher Stephens—we would not be where we are today.

Instead, the State Department and the White House have worked to frustrate investigators.

No fewer than seven congressional committees attempted to get to the bottom of Benghazi, and yet it took court orders to unearth relevant White House and State Department documents, eventually leading to the creation of the Select Committee on Benghazi in May 2014.

Were it not for the Benghazi Select Committee, eyewitnesses to the attack would not have been interviewed. Nor would the existence of Clinton’s private email server have been revealed, or the role of unofficial Clinton adviser and friend Sidney Blumenthal in the Libya policy disaster.

As recently as last Friday, the State Department made another dump of 925 Benghazi-related emails from Clinton’s private server to the committee, emails not previously revealed.

“State is confirming it failed to previously disclose all Libya- and Benghazi-related messages from the former secretary,” committee spokesman Jamal Ware said in a statement. “The State Department, which has failed to comply with multiple Benghazi committee requests and failed to act in good faith, is now indicating it intends to foster a more cooperative relationship with the committee.”

As the timeline suggests, the State Department has a record of noncompliance that must leave investigators skeptical of any improvement.

The work of the Benghazi select committee has been like pulling teeth—which is, in fact, why the end is still not in sight.