Early Boehner Opponent in House Gets Vote of Confidence From Home 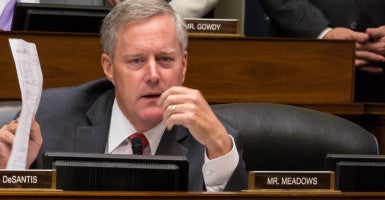 >>> Updates with Oct. 9 statement from North Carolina’s lieutenant governor amid wide-open race for speaker of the U.S. House.

The congressman who stood up to Speaker John Boehner weeks before the House’s top Republican quit got some fan mail Tuesday afternoon from state lawmakers back home.

“To see him push back against the old establishment in Washington really impressed me.” @RepMikeHager

The letter thanks U.S. Rep. Mark Meadows, R-N.C., for his “undying support of conservative ideals” and his “willingness to champion the same against the status quo and gridlock in Washington.”

“To see him push back against what I consider the old establishment in Washington really impressed me,” North Carolina House Majority Leader Mike Hager, the man behind the missive to Meadows, told The Daily Signal.

“When you get someone in the foxhole and see how they react under pressure, that’s who they really are,” Hager added in a telephone interview Tuesday evening.

>>> As McCarthy Exits, Freedom Caucus Stands by Webster for Speaker

Meadows, a second-term congressman, filed a historic motion July 28  to oust Boehner, the U.S. House’s top Republican since 2007, from the speaker’s chair because of “no confidence” in his leadership. The measure didn’t go anywhere at the time.

Boehner announced his resignation from Congress on Sept. 25, amid mounting criticism from conservatives.

“This has never been about me,” Meadows told The Daily Signal afterward. “And if this is the first step in allowing Capitol Hill and Washington, D.C., to listen to the American people, than we can look at this as a giant step forward.”

“He took the first step and others have followed.” @LtGovDanForest on @RepMarkMeadows and US House leadership

>>> Update: No one at the time could have predicted Boehner’s heir apparent, Majority Leader Kevin McCarthy, suddenly would exit the race for speaker. The Californian’s surprise move Oct. 8 threw the House leadership lineup into doubt and gave conservatives new hope that one of their own may ascend to the chair.

In a statement Oct. 9, North Carolina Lieutenant Gov. Dan Forest, a Republican, highlighted the role of Meadows in setting the dramatic events in motion:

It was Mark Meadows who risked his status and position in Congress to do the right thing and initiate a change in leadership. He did it for all the right reasons and fully understanding the consequences to his political career.  It often takes great courage to stand up and do the right thing in Washington and Mark displayed great courage when he stood up to his leadership team for the people of this great country. He took the first step and others have followed … isn’t that the very definition of leadership?

Meadows, a real estate developer and former restaurant owner,  first got an inkling Hager was up to something less than two weeks before Boehner said he would resign effective Oct. 30.

Hager had called Meadows to express his support and admiration—and to say he was going to get together other legislators in the western part of North Carolina to communicate their mutual feelings.

“It kind of makes you feel good when you know other folks are on your team,” Hager said he reasoned.

What was the reaction from Meadows?

“He seemed very gracious, surprised … that someone would take time to get something like this together,” Hager told The Daily Signal. “I think he was taken aback a little, to tell you the truth.”

>>> ‘Best We Have a Fresh Face’: McCarthy Drops Out of Speaker’s Race

In the 2012 election, Republicans gained the North Carolina governorship as well as the state’s House of Representatives and Senate, the first time that had happened in 140 years.

Hager, 52, has known Meadows, 56, only since his successful 2012 run to represent North Carolina’s 11th Congressional District. But the state legislative leader, who lives in a neighboring district, said he saw what the new congressman was up against in Washington. Meadows briefly lost a subcommittee chairmanship in a rebuke from leadership.

“I can only imagine the pressure on him,” Hager said, adding of his colleagues in Raleigh:

We know how hard it is to maintain your conservative values when people are trying to convince you otherwise. … We wanted to make sure he knew the values we have are the same values he has—that he can govern with those values, they mean as much to us as they mean to him.

To buck up Meadows, Hager—whose district is based in Rutherfordton County—gathered the signatures of 16 other Republicans in the North Carolina House between Sept. 17 and Oct. 1.

“He makes all North Carolinians proud,” @JohnBellNC says of @RepMarkMeadows.

Three of the lawmakers hail from the more liberal, Democrat-dominated eastern part of the state, Hager noted. One is his top deputy, Majority Whip John R. Bell IV, who signed the letter to Meadows last week during a break in floor action.

>>> ‘No Regrets’: Back Home, Meadows Reflects on Move to Oust Boehner

“People are tired of the same old song and dance.  They want change and they want action,” Bell said Wednesday morning in a telephone interview with The Daily Signal. “He makes all North Carolinians proud.”

Bell, 36, said he also admires his own congressman, Rep. George Holding, R-N.C. Asked why he wanted to salute Meadows, whom he doesn’t know personally,  Bell said:

He’s not willing to give in on what he believes is the right thing to do. … It’s a lot easier to agree and move on than to stand strong. People want someone who is going to fight. Now we just need three or four hundred more of them.

The letter on Hager’s official letterhead, which he faxed to Meadows’s Capitol Hill office about 2:30 p.m. Tuesday, reads in full:

We, the undersigned, wish to extend our sincere gratitude and thanks for your undying support of conservative ideals and willingness to champion the same against the status quo and gridlock in Washington. Your continued leadership is crucial to helping put our great country back on the right track. We pledge to you our continued support and backing, knowing that you are working tirelessly to promote values and philosophies that look out for the interests of Western North Carolinians.

In a tour of his district with Meadows in late August, The Daily Signal witnessed his popularity among typical constituents.

“It’s easy [for some] to be conservative until it affects you and your district,” Hager told The Daily Signal. “We’ve called it courage. He’s become a role model, I think, for us conservatives down here.”

Hager faxed the letter Tuesday at the request of a Meadows aide when he learned it was mailed Friday. The aide figured it likely would get caught up in the congressional security system.

“I’m not sure how things work in Washington, but I just get the feeling that everything moves slow up there,” Hager quipped.