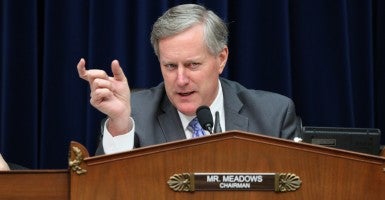 “I will continue to vote and conduct myself in accordance with my conscience, what my constituents want me to do, and what is best for the country,” says @RepMarkMeadows

“Obviously I believe in Mark Meadows or I would not have appointed him to this position in the first place,” Chaffetz said in a joint statement with Meadows. “It is in the best interest of the committee to move forward together. Therefore, I have asked Mark to continue in his role as subcommittee chairman.”

Chaffetz, chairman of the House Oversight and Government Reform Committee, had asked Meadows, a North Carolina Republican, to resign his chairmanship of the Government Operations subcommittee or be removed. When Meadows declined, Chaffetz demoted him.

News of the decision broke earlier this week, coming on the heels of Republican Whip Steve Scalise’s ouster of three conservatives from the GOP whip team.

Conservatives in the House were bracing for additional punishment Thursday. Rep. Ken Buck, R-Colo., beat back a possible challenge to his presidency of the freshman class this morning. Other subcommittee chairmen feared their jobs could be in jeopardy.

At issue is a vote 34 Republicans took last week against leadership on President Obama’s trade deal.

Following his removal as subcommittee chairman, Meadows spoke out against the “culture of punishment” under Speaker John Boehner, R-Ohio, and his leadership team. In his joint statement with Chaffetz, Meadows said he appreciated the Utah Republican’s willingness to reconsider the decision.

“I will continue to vote and conduct myself in accordance with my conscience, what my constituents want me to do, and what is best for the country,” Meadows said.

Facing a backlash from conservatives, Chaffetz defended the move—and himself—in the interview with Cavuto.

“I consider myself a tea party person,” he said. “My goodness, I helped lead the charge. You look at my voting record and what I’ve done in Congress and how many interviews people have introduced me as a tea party congressman.” When pressed by Cavuto about his decision to demote Meadows, Chaffetz said Boehner had nothing to do with it.

In his statement Thursday, Chaffetz said of Meadows:

A number of people have asked me to reconsider that decision. Having spoken with Mark Meadows several times during the past week, I think we both better understand each other. I respect Mark and his approach. The discussions and candor have been healthy and productive. Ultimately, I believe we both want to do what is best for the country.