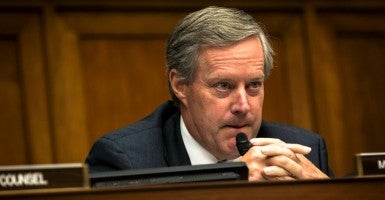 Rep. Mark Meadows, whose rare motion to depose House Speaker John Boehner expedited the top leader’s decision to retire, does not take any personal satisfaction out of the leadership change he helped inspire.

Meadows did not spend the weekend popping champagne, or charting his own path to the top.

He didn’t even go home to the people who he says challenged him to challenge leadership–his constituents.

He did manage a haircut.

“This has never been about me,” Meadows told The Daily Signal exclusively on Sunday, vowing that he will not personally seek a leadership position.

“So I don’t need to feel vindicated, as much as the American people needed to be heard. And if this is the first step in allowing Capitol Hill and Washington, D.C., to listen to the American people, than we can look at this as a giant step forward.”

It’s too early to tell who should get credit or how successful it is. Certainly the motion to vacate was a factor, but the biggest factor was the voices of the American people saying they want something different out of elected officials.

In July, Meadows, a North Carolina Republican, presented a motion to vacate the chair, an extraordinary measure of no confidence in the speaker of the House that hadn’t been used in a century.

>>>Home in North Carolina, Mark Meadows Reflects on Move to Oust John Boehner With ‘No Regrets’

Though the House did not vote on the measure at the time, Meadows insisted that the motion would always be there as a weapon if Boehner did not lead to the liking of frustrated conservatives.

On Friday, before a vote to overthrow him could happen, Boehner resigned from Congress, at least partially because he didn’t want to “make members walk the plank” and face a difficult choice on whether to betray their own leader.

Meadows, who temporarily was stripped of a subcommittee chairmanship earlier this year for defying leadership on a procedural vote, has always insisted he was less interested in replacing Boehner than pressuring him to create a more “inclusive” process. 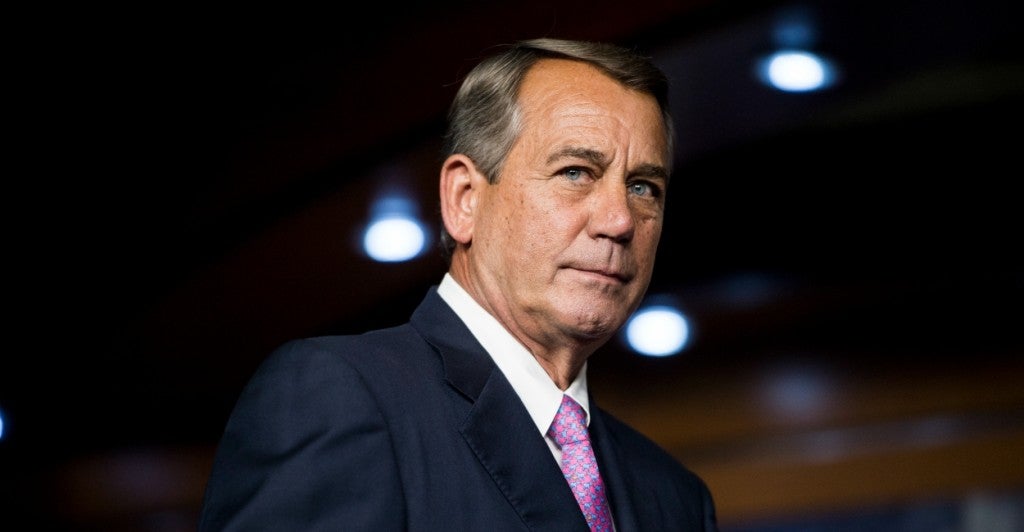 House Speaker John Boehner, R-Ohio, insisted he had the votes to survive a vote to oust him. (Photo: Bill Clark/CQ Roll Call/Newscom)

Boehner, who supporters say has actually tried hard to include conservatives but could never placate their demands, did not give himself the chance to prove them wrong.

“I will be first one to admit that [since the motion to vacate] there have been several real conferences where we’ve had actual debates on substantive legislative initiatives,” said Meadows, who seemed satisfied with how leadership has included conservatives in the funding debate over Planned Parenthood, and how they accepted conservative demands on the Iran nuclear issue.

“There had already been the genesis of some type of change. This will bring it on perhaps quicker, but that depends on decisions in the next few weeks as to what the future will look like.”

This week, the House Republican conference will begin the process of charting its future.

>>>John Boehner Is Resigning As Speaker of the House. What Happens Next?

There is little debate over who will be the next speaker of the House—Boehner’s no. 2 man, Majority Leader Kevin McCarthy, R-Calif., is already reportedly locking down support for the top job.

Rep. Daniel Webster, a conservative from Florida who won just 12 votes when he ran against Boehner in January, is the only other announced candidate so far.

Though Meadows and other conservatives of the House Freedom Caucus respect McCarthy and the efforts he’s made to develop relationships with them, they will want a say in the leadership election process.

On Sunday, the Freedom Caucus released a statement saying its members had not decided on whom to support for speaker or any other leadership position, and vowed to meet with each candidate in a “deliberate fashion.”

Indeed, Rep. Peter Roskam, R-Ill., who may be after a leadership spot himself, successfully pushed for the GOP to hold a private meeting to discuss their future before rushing into leadership elections.

Meadows has an idea about what he wants.

“I hope that the new leadership will get rid of  the culture of punishment, will give time for bills to be read, and lastly and most importantly, not lurch from one crisis to another,” Meadows said.

The election drama comes at a consequential time for Republicans, and especially Boehner and his leadership team, who must juggle his legacy and their own futures. 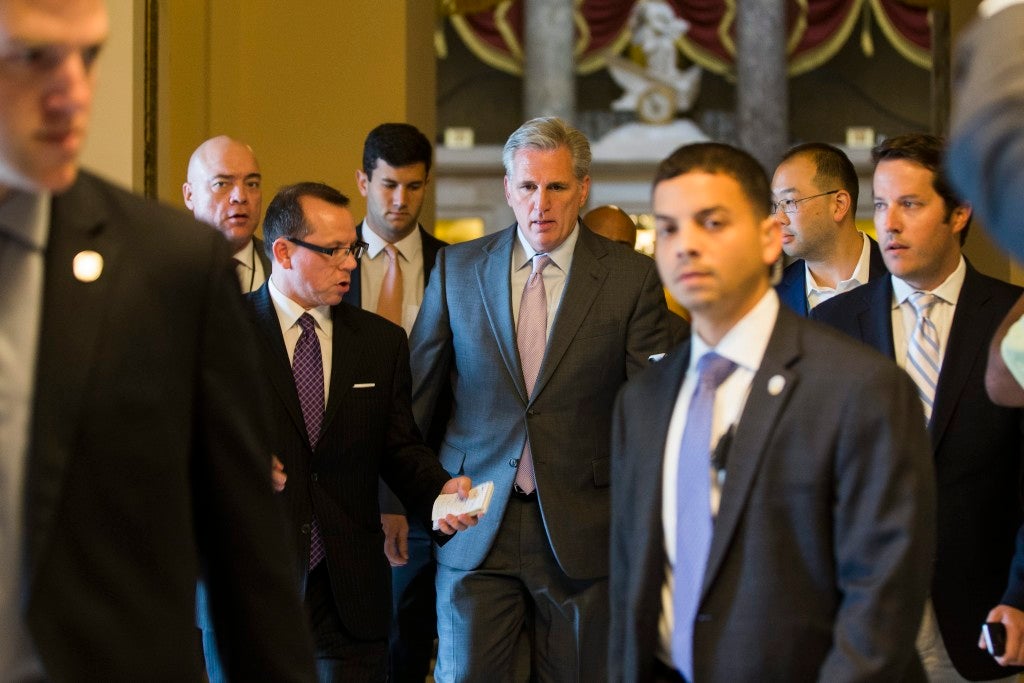 Speaking on CBS’s “Face the Nation” Sunday, Boehner said he expects the House to avert a shutdown by passing the Senate’s government funding measure without blocking money for Planned Parenthood. The funding measure, in the form of what’s known as a continuing resolution, would expire Dec. 11, setting up another showdown before Christmas.

Some Freedom Caucus members tell The Daily Signal that Boehner has already warned them that he will have to agree to lift caps on domestic spending in order to secure a long-term government funding measure.

Others have speculated that Boehner could aim to also lift the debt ceiling, revive the Export-Import Bank—a federal export credit agency despised by conservatives—and negotiate a long-term transportation bill.

“I will make the same decisions the same way I have the last four and a half years, to make sure that we’re passing conservative legislation that is good for the country,” Boehner said Sunday, speaking of his final days before he officially retires Oct. 30.

“I will get as much finished as possible. I don’t want to leave my successor a dirty barn.”

Meadows says he and fellow conservatives will be watching carefully, especially at how current leaders aspiring to move up—such as McCarthy and Reps. Steve Scalise of Louisiana and Cathy McMorris Rodgers of Washington—handle these issues.

“I take the speaker as one who is willing to listen to the vast majority of the conference at this point,” Meadows said.

You have a leadership team who will be running for other positions that will be evaluated based on their influence on what may or may not come up in upcoming months.

With that said, Meadows and other Freedom Caucus members such as Reps. Dave Brat of Virginia and Mick Mulvaney of South Carolina believe that their members don’t have the clout to insert one of their own into a leadership position (though many are pushing hard for Rep. Jim Jordan of Ohio to have a strong role in the election process, if not run for a position himself).

“I don’t see there being a scenario where we have McCarthy and Scalise move up [to speaker and majority leader respectively] with a third position going to some conservative,” Meadows said.

“I don’t think the American people would want that or the majority of the conference would support it, either. If you have just one person added to the equation, it doesn’t change the process, and those points on the resolution that I outlined have nothing to do with the personality as much as the process. It’s not as much the who, but the what.” 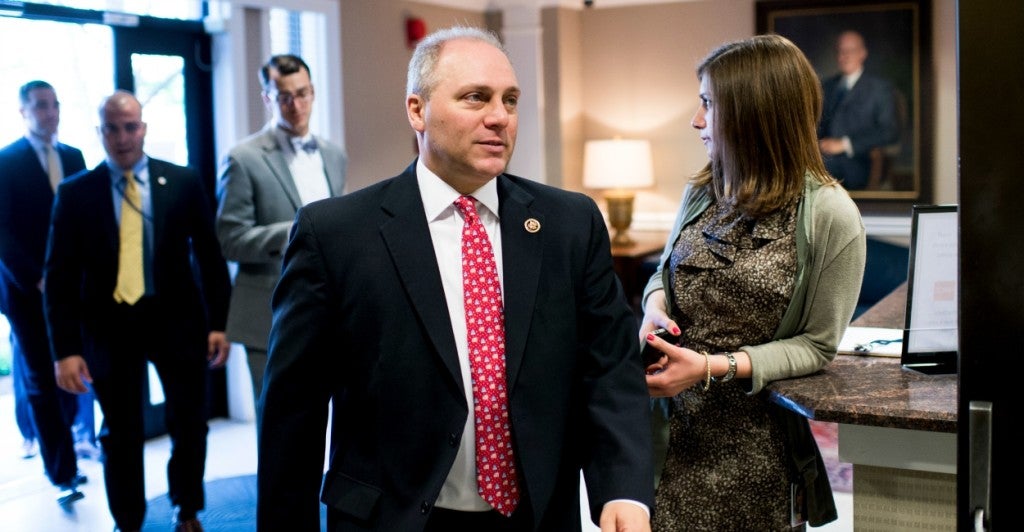 Boehner and the more moderate elements of the party believe that conservatives are the reason for the dysfunctional process by refusing to compromise, and enabling a crisis-by-crisis way of legislating.

On Sunday, Boehner re-emphasized that charge, referring to “some” elements of the GOP as “false prophets” who are “unrealistic” in the limits imposed by Senate Democrats’ ability to filibuster legislation and President Obama’s power to veto.

Meadows and others argue that Republican leaders created such expectations by their lofty rhetoric in the wake of winning control of the Senate.

“If there is indeed a false prophet, it doesn’t have to do with legislative issues, but promises on the campaign trail that have yet to be fulfilled,” Meadows said.

“When there has only been two bills put on the president’s desk that have been vetoed, the American people expected more than that. Too many Americans think we have waved the white flag of surrender and are willing to give the executive branch total power of anything that’s passed.”

Now, Meadows believes, Republicans should try to fulfill their promises.

“It really is just about—I will continue to do what I’ve always done, which is to listen as intently as I can to the people who elected me and hopefully get their priorities accomplished,” Meadows said.

Though Meadows tries to downplay the impact his motion had on facilitating a change in leadership, his colleagues are more direct.

“Meadows is a selfless guy—this is exactly what he wanted—an opportunity for the American people to see some room for a new direction,” Brat told The Daily Signal. “And hopefully we get it right now.”