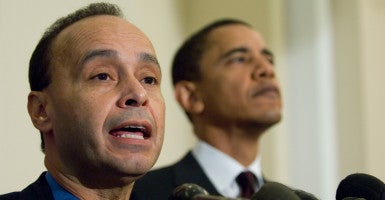 The pope’s reminder of the Golden Rule during his visit to Congress inspired a House Democrat to introduce legislation to expand the Affordable Care Act.

“The goal is to cover everyone in this country, regardless of immigration status, provided they establish state residency and file taxes (which most immigrants already do),” states the congressman’s Facebook page. “We have to make sure it’s accessible to everyone living here.”

“With respect to legal immigrants, because prior law bars them from receiving Medicaid for five years following the grant of legal status,” Haislmaier said, “the [Affordable Care Act] allows [legal immigrants] to claim the exchange tax credits and cost sharing subsidies, even if they have incomes below the threshold at which those subsidies are not available to citizens.”

The bill subjects everyone to an individual mandate to be on health care insurance.

“We should account for the real nature of [undocumented immigrant’s] integration into American society and include as many as possible in our health system,” states a press release from the office of Gutiérrez.

On the day of the bill’s introduction, Sept. 30, the legislation was referred to the Energy and Commerce as well as the Ways and Means Committees in the House.