Meet the Underdog Republican Running for Speaker of the House 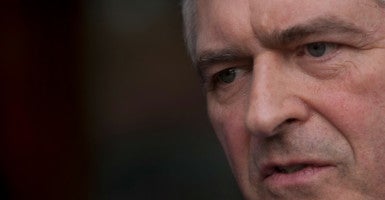 Update: The House Freedom Caucus announced Wednesday it would endorse Rep. Daniel Webster of Florida for speaker of the House in the vote before the Republican conference.

House Majority Leader Kevin McCarthy may have emerged as the frontrunner in the race for speaker of the House, but Florida Rep. Daniel Webster is emboldening his Republican colleagues to buck leadership’s status quo in favor of a new approach to legislating.

Speaker John Boehner’s decision to retire sent Republicans scrambling to decide who would run for the leadership positions. So far, Webster is facing McCarthy and Rep. Jason Chaffetz, R-Utah, in the race for the top Republican leadership position. But with the House Republican conference gathering on Thursday, more contenders could emerge before then.

Though McCarthy has been considered the favorite to win, Webster, 68, is pitching himself as a leader with a proven record from his days in Florida’s state house, and one who is looking to deviate from business as usual in the Republican conference.

“I would like to see a principle-based, member-driven process,” Webster said in an interview with The Daily Signal. “If we did that, many of the problems we have now would be solved. And it’s based on the fact that bills and ideas and so forth should be judged on what it says, not on who it is.”

Webster, who worked in his family’s air-conditioning business, had a long and storied career in the Florida legislature and served nearly three decades in Tallahassee.

First elected to the state House of Representatives in 1980, Webster moved up the ranks in the GOP’s leadership, starting first as minority whip and then minority leader. Republicans gained control of the state House in 1996, and that year, Webster, who represented central Florida, successfully ran for the speakership.

In 1998, after serving more than 15 years in the Florida House of Representatives and two years as the speaker, Webster was forced to leave the state House because of term limits.

But he didn’t leave Tallahassee for good.

That year, Webster ran for the Florida state Senate and won. He later served as majority leader from 2006 to 2008.

In 2008, again because of term limits, Webster retired from the legislature and left Tallahassee.

John Arie, president of Fun Spot in Orlando, became a supporter of Webster’s during his time in the state House. In an interview with The Daily Signal, Arie recalled working with Webster for the first time in the 2000s, when he went to Tallahassee to meet with a group of legislators.

During that meeting, Arie said he was impressed by how much time Webster devoted to meeting with him.

He’s been a supporter ever since.

“We’ve gotten to know each other,” Arie said. “He’s principled. He’s a Christian. He cuts his budget and turns it back into the government. He’s a humble man and has a tremendous family that we support.”

“[Webster] has my vote of confidence [for speaker],” he continued. “I know whatever he would do, he would work to the best of his ability,” Arie said. “I think that’s what we need in Washington, so we’re not so partisan, but we’re working for the good of everyone. If he wins, I think it’ll be a game changer in the House.”

Rich Crotty served 12 years in the Florida House with Webster and praised him for his ability to build consensus among opposing parties.

“He’s very low profile. He’s not a bomb-thrower or a fire-breather,” Crotty said in an interview with The Daily Signal. “He’s a very reasoned and level-headed individual who builds consensus through trust and through working with folks.”

In an interview with The Daily Signal, Webster said his experience in the Florida legislature gives him an edge in the speaker race.

“I’ve done it, and I did it differently in a way that would actually unify us, produce a better product,” he said.

Webster referenced the low opinions Floridians had of the state legislature prior to his tenure as speaker of the Florida House, and likened that sentiment to how Americans feel about Congress. Under his leadership, though, Webster said their opinions changed.

“Our poll numbers were just like the United States Congress until we did what we did, and they flipped right side up, 56 percent to 25 [percent], which was pretty awesome,” Webster said. “It never happened before. The public saw it. The members saw it. Everyone loved it.”

Webster traded in the state capitol in Tallahassee for the U.S. Capitol in Washington in 2009, when he was elected to represent Florida’s 8th Congressional District at the start of the 111th Congress.

Today, his district is Florida’s 10th.

Over the course of his three terms in the U.S. House, he’s maintained a relatively low profile, serving on the House Committee on Transportation and Infrastructure.

And he’s remained committed to his constituents.

In an interview with The Daily Signal, Arie recalled a December 2012 floor speech delivered by Webster.

Fun Spot had been awarded the 2012 Brass Ring Award from the International Association of Amusement Parks and Attractions, and Webster delivered a congratulatory speech honoring Arie and his family on the House floor, entering it into the congressional record.

“On behalf of the citizens of Central Florida, I am pleased to recognize and congratulate Mr. Arie and his family for their hard work, dedication and leadership on this well-deserved award,” Webster said. “May their investment to community and small business inspire others to follow in their footsteps.”

“It was quite an honor and totally unexpected,” Arie said. “He definitely is in touch with the locals here. He’s truly involved.”

In January, Webster joined fellow conservative lawmakers in an attempt to remove Boehner from his position as speaker.

Webster launched an 11th-hour bid for the speakership, announcing his candidacy just one hour before lawmakers from both parties were preparing to publicly vote for the next speaker of the House.

Webster lost, but garnered the second-highest number of Republican votes behind Boehner, with 12 of his colleagues standing behind him. January’s speaker election saw 25 Republicans voting against Boehner, and marked the biggest defection from an incumbent in the last century.

Webster’s defiance lost him his seat on the House Rules Committee.

“Because of some of the activities on the floor, two of our members weren’t put back on the committee immediately,” Boehner told reporters at the time.

Not long after Boehner’s resignation, Webster announced he would be making a bid for the speakership once again, taking on McCarthy and Chaffetz, who officially announced his bid this weekend.

Webster’s bid comes at a time when the fracture in the House Republican Conference is particularly evident—some say Boehner’s resignation was brought on by North Carolina Republican Rep. Mark Meadows’ motion to vacate the chair, which signifies an extraordinary vote of no confidence in the sitting speaker of the House.

Conservatives—many of whom voted against Boehner in January—warned that they would move forward with the motion following a contentious fight over Planned Parenthood funding in a government spending bill, and it’s questionable whether Boehner would’ve had the support of enough of his colleagues to survive the attempt to oust him.

In an interview with The Daily Signal, Webster lamented the “power system” that Republican leadership employed under Boehner’s watch.

“If you’re a chairman or a senior member or a member of the right party, then your bill is a good idea based on that. That’s a power system–where a few people at the top of the pyramid of power make all the decisions,” he said. “On the other hand, if you push down the pyramid of power and spread out the base, every member gets a player and what they propose is judged by one thing: what it says.”

Under his leadership, Webster wants to “give back the members their voting cards,” and move away from the last-minute appropriating that has become a trend over the last several years.

>>> Why Does It Matter Who the House Speaker Is? Looking at House Leadership’s Responsibilites

“He’s relatively new to Washington compared to some of those who have toiled along in the seniority system, and he wants to take the proven leadership that he was able to achieve in Tallahassee to the nation’s capitol, which is view by many as completely dysfunctional,” Crotty said.

“I have all the confidence that he would be a reasonable guy to work with folks and try to get something done for a change.”

In an interview with The Daily Signal, Webster said he his goals as House speaker are to produce member bills, pass 12 appropriations bills long before the end of the fiscal year, September 30, and lay out three-year plans for authorizing programs to stop a trend of allocating money to those that have expired authority.

Webster’s bid for the top leadership position has been called a long-shot, but he believes his approach to leading—bolstered by his experiences in Tallahassee—would help unite the divided House GOP.

Webster’s plan has already attracted the attention of at least one Republican lawmaker—Rep. Thomas Massie of Kentucky.

“I like Daniel Webster’s message of reforming the process and getting back to principle instead of power,” Massie told The Daily Caller.

His office did not return The Daily Signal’s request for comment.

Webster, meanwhile, believes he can offer Republicans in the House a clean slate, compared to McCarthy, whose record in leadership precedes him.

“I don’t have a battle of personalities or anything else,” Webster said. “What I am battling is a system that exists today, and that is we push everything to the end. That’s what a power-belief system does. It allows a few people to make all the decisions.”

And with Webster as House speaker, he would be focused not only on changing the process within Republican leadership, but in Washington, too.

“America is not broken,” he said. “Washington is.”