‘Save Our States’ Is Fighting to Keep the Electoral College Alive 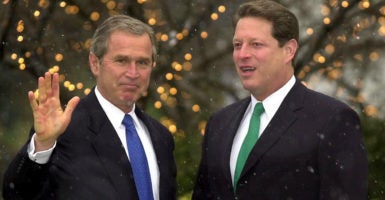 The National Popular Vote Interstate Compact "really goes back to the 2000 election when, obviously, Al Gore ... got the most popular votes, but he lost the election because he lost in the Electoral College," says Trent England. (Photo: Tannen Maury/AFP/Getty Images)

In 2000, Al Gore won the popular vote—and lost the election. Cue a renewed interest from the left in demolishing the Electoral College. Now 15 states and the District of Columbia have joined the National Popular Vote Interstate Compact. Trent England, director of Save Our States, joins the podcast to discuss what his group is doing to increase enthusiasm for the Electoral College. Read the lightly edited interview, pasted below, or listen on the podcast:

Daniel Davis: I’m joined now by Trent England. He is the executive vice president of the Oklahoma Council of Public Affairs and he’s director of Save Our States, a program aimed at preserving the Electoral College. Trent, thanks for your time today.

Davis: So Save Our States, that’s the name of your program, and that name implies that states are facing a real threat to their relevance and their power in our political system. So in what way do the states need to be saved?

England: Yeah, no, there is a real effort going on to rip up state lines when it comes to presidential elections. It’s called the National Popular Vote Interstate Compact. People have probably seen AOC [Rep. Alexandria Ocasio-Cortez, D-N.Y.,] is out there tweeting against the Electoral College. [Democratic Sen.] Elizabeth Warren is giving speeches about how the Electoral College should be abolished.

Davis: … You mentioned the National Popular Vote Compact. After the 2016 election, all these states decided that they really didn’t like the Electoral College because President [Donald] Trump won the Electoral College, lost the popular vote. Can you explain exactly what that effort is trying to do and why it’s off base?

England: Yeah, sure thing. I mean, it really goes back to the 2000 election when, obviously, Al Gore, he got the most popular votes, but he lost the election because he lost in the Electoral College. And a couple of very liberal law professors cooked up this idea, they recognized that the left had actually tried a whole bunch of times to amend the Constitution, get rid of the Electoral College, and every time they failed.

So they realized, “We’ve got to do something different.” And what they came up with is called the National Popular Vote Interstate Compact, or NPV. And it has states agree in a law to ignore how their own voters vote. And instead, elect their presidential electors based on the national popular vote.

So, if you think that through, it really … hijacks the Electoral College to use it to do exactly what the American Founders rejected, which is to create a direct election system, a national popular vote, a direct election for president of the United States, rendering state lines irrelevant, rendering state governments and state laws potentially irrelevant in the process.

And they had a bunch of states adopt this basically in 2007, 2008, 2009. We launched Save Our States in 2009, really fought them to a draw. But then, as you say, when the 2016 election happened, all of a sudden there was all this political animosity and pressure to join National Popular Vote. And today, we see 15 states plus the District of Columbia that have joined the National Popular Vote Compact. They need 270 electoral votes to put it into effect.

They need states to join it, that control 270 electoral votes. They already have 196 electoral votes committed. So that’s why … Save Our States is doing everything we can right now to protect the Electoral College and stop this effort to hijack our constitutional process.

Davis: A lot of people who are critical of the Electoral College point out that candidates seem to spend an awful lot of time in Ohio and Florida and these swing states, they get so much attention. And other states, like maybe the one you live in Oklahoma, D.C., where I live, not so many candidates [come] through to talk to voters.

England: No, it really isn’t. It sounds great, but this is the kind of proposition that the American Founders actually made fun of when they were writing the Constitution. These utopian ideas, “Well, you know, if we just change the rules, then we could take the politics out of politics.” What National Popular Vote would do is really shuffle the deck.

Really what National Popular Vote would do is make all of the major cities much, much more important in our process. Because, Los Angeles County has 10 million people in it, right? That is more than double the population of my home state. And when you take the LA metro, the Chicago metro, the New York metro, and you put them together, there are more people than in the entire state of California. So National Popular Vote would shift political power to the big cities.

The thing about swing states is, they’re just whatever states happen to be the most evenly politically divided at that moment in time. They shift around all the time and that’s constantly changing. It’s always in flux, it expands, it contracts.

If you got rid of that system, you would have really permanent power vested in these major cities. And James Madison actually talked about that at the Constitutional Convention. In July, 1787 he pointed out that would be a really dangerous result of having a direct election of the president. That’s why we have the Electoral College.

So … in a sense, yeah, sure. It gives smaller states a leg up because it incorporates the Senate in the calculation. And it does make sure that you can’t build a coalition based on a few big cities and take permanent control of the executive branch.

I mean, I can understand why AOC is frustrated. … Look, if you represent that wing of the Democratic Party, it makes them crazy that they have to moderate their position on, say, gun control. Because they have to win over these knuckle-dragging voters in Wisconsin. … That’s how they feel about it. And I understand that.

But I do think that having some incentives for moderation, that’s a good thing. I wish that politicians would appreciate those checks and balances a little more, but we can understand why they don’t.

Davis: Well, and of course, some of the small states are blue states, right? I wonder about states like Vermont and Rhode Island, they’re not going to be helped at all. The compromise struck during the founding era … was that small states wanted some things, so they got the Senate and they got the Electoral College. So doesn’t it basically come out even? I mean, small states being red and blue?

England: I mean, that’s true. It really … respects states as states. It gives a boost to the smallest states. It prevents politicians from winning just by driving up the score where they’re already popular or building a hyper-popular regional coalition. It forces them to reach out across the country.

We have two big national political parties and a lot of political stability, a lot of very organic coalition building that goes along with that because of this Electoral College system. But at the same time, it makes sense that politicians would bristle at it because it’s politicians who are being controlled.

It’s politicians’ power that’s being limited by the Electoral College. So it’s really up to we the people, right? It’s up to citizens to say, “No, look, we actually … value these checks and balances. We value the constitutional institutions that put some limits on politicians and their power.”

Davis: A growing concern is the security of our elections. Interestingly, we’ve had some cases of voter fraud in the past couple of years on both sides of the political aisle, showing that voter fraud does not discriminate between the parties. Does the Electoral College play any role in guarding against the dangers of vote fraud?

England: Yeah, absolutely. That’s a really good question. The Electoral College uses state lines like the watertight compartments on an ocean liner, right? I mean, when the Titanic went down, they realized we have got to compartmentalize all these parts of an ocean liner so that when you have a leak in one part of the ship, the water doesn’t flow through the whole ship and sink the whole thing, right?

The Electoral College does that with our presidential elections because … it could just be a mistake, right? Bad ballot design in Florida or something like that. Hanging chads, they’re not sure what to do. Or it could be fraud, but whatever happens, it’s at least contained in the state where it happens. It never spills over. We never need a nationwide recount under the Electoral College. This is a huge protection against voter fraud.

It also means that the states that are going to be swing states in any given election are also likely to be the most politically divided, right? So in my experience, it seems like where you see vote fraud is where one party or the other pretty much controls everything.

Very often you see vote fraud in primaries because it’s all the Democrats, or it’s all the Republicans, it’s an intraparty fight. Because of the way the Electoral College works in practice, these battlegrounds are the places where it’s the very hardest to commit election fraud because there’s the most political accountability. I think that’s an interesting side effect that helps us have integrity in presidential elections.

Davis: Very interesting. Well, Trent England is at the Oklahoma Council of Public Affairs. Check out his initiative, Save Our States. Trent, thanks for your time.

England: Yeah, my pleasure. Thanks so much, Daniel.