Area Residents Take to the Streets of Ferguson. But Not for the Reason You Think. 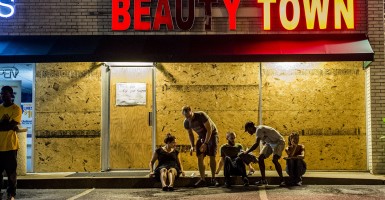 'Tea party came up here to do this?': Damaged businesses like this one in Ferguson were targeted by 'buycotters.' (Photo: Newscom)

St. Louis County residents who wanted their voices to be heard decided to show up in Ferguson, Mo. Their goal: To give some much-needed business to shops damaged by vandals and looters.

More than 40 members of the St. Louis Tea Party Coalition headed to the embattled town Thursday evening to shop at the small businesses and support the local economy.

Led by Bill Hennessy, one of the group’s founders, they shopped at a variety of stores in Ferguson and made plans to “buycott” the St. Louis suburb again next weekend.

>>> Check out the video below.

Protests following the Aug. 9 shooting death of Michael Brown turned violent as riots broke out across the town of 21,000. More than 30 stores were looted and damaged as a result, and one, a QuikTrip, was burned to the ground.

In response, Hennessy planned the “buycott” to remind local consumers that damaged businesses in Ferguson remained open. In an interview with The Daily Signal last week, Hennessy said:

People have in their minds that Ferguson is a very dangerous place, and it’s not. We’re going to continue having occasional ‘buycotts’ long after this is over to keep reminding people that they can go back there. The easiest way to have a long-term problem in Ferguson is for everyone to abandon the area.

>>> Some Neighbors Are Headed to Ferguson Today. The Reason Will Warm Your Heart.

Funeral services were held today in Ferguson for Brown, who witnesses said was unarmed when he was shot by Ferguson police officer Darren Wilson.

On Thursday, shoppers gathered on West Florissant Street at 5 p.m.   to begin shopping at stores damaged by looters. Groups of three to four “buycotters” shopped at Sweetie Pie’s, Paul’s Market, the Ferguson Bicycle Shop, Whistle Stop Depot and Sportsprint, among others.

Hennessy, of Wildwood, Mo., said store owners were surprised to see a group of “tea partiers” in Ferguson.

He recalled meeting a woman named Dellena Jones who owns the 911 Hair Salon and lost inventory in the riots. He insisted on giving her a donation.

On his blog, Hennessy writes about speaking with a middle-aged man in the salon:

‘Tea party?’ [the man] said. ‘You bad boys,’ and chuckled. Then he looked at me, very serious. He said, ‘The tea party came up here to do this?’

Bill Hennessy (in green shirt) joins in a “selfie” with other “buycotters” and staff of 911 Hair Salon in Ferguson. (Photo: Courtesy Hennessy’s View)

Other store owners expressed gratitude for the business.

“The greatest statement an organization or person can make is to say with actions, not words, ‘what unites us is stronger than what divides us,’ ” Hennessy writes.

The group’s next “buycott” in Ferguson is set for Labor Day weekend.Hennessy also said he hopes the Missouri state legislature passes an emergency bill creating a Ferguson Sales Tax Holiday from “Black Friday” (the day after Thanksgiving) until Christmas.