Jason Chaffetz Is Running for Speaker of the House. Here Are 20 Facts About Him. 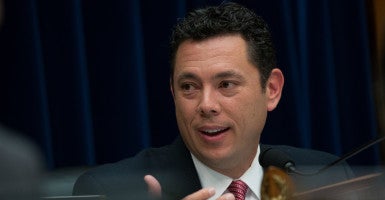 House Speaker John Boehner, R-Ohio, announced last week that he will resign as speaker and forfeit his congressional seat at the end of this month. Contenders for House speaker include Reps. Kevin McCarthy, R-Calif., and Daniel Webster, R-Fla.

Here are 20 facts about Chaffetz.

1. While in Washington, Chaffetz sleeps on a cot in his office.

Moving offices and the cot is coming with me. New digs will be Rayburn 2236 starting tomorrow. pic.twitter.com/0ClW24FUTQ

2. According to his congressional biography, Chaffetz and his wife Julie were married in 1991, and they have three children.

Happy birthday to the love of my life, my wife, Julie. I love you! Happy birthday! pic.twitter.com/A9Pt6pDvbd — Jason Chaffetz (@jasoninthehouse) March 14, 2015

4. He played football at Brigham Young University as a starting placekicker.

6. He worked as a campaign manager and chief of staff to former Utah Gov. Jon Huntsman Jr.

7. In 2008, he was elected to represent Utah’s 3rd Congressional District.

8. He investigated the terrorist attack on the American consulate in Benghazi, Libya, on Sept. 11, 2012.

9. He played a role in investigating the Justice Department after the “Fast and Furious” scandal, a Bureau of Alcohol, Tobacco, Firearms and Explosives gun-running operation.

10. He was one of the members of Congress who participated in a probe of the IRS following its targeting of conservatives.

11. Chaffetz recently introduced legislation that would allow pet owners to compare prices for their pets’ medication by obtaining a copy of the prescription from their veterinarian. He said the bill would result in “more competition, lower prices, [and] provide greater medication options.”

12. Many members of Congress allow their staff to manage their social media accounts, but according to Chaffetz’s Twitter account, he manages his own. He tweets with the handle @jasoninthehouse.

13. He has co-sponsored legislation such as the Born-Alive Abortion Survivors Protection Act, the Defund Planned Parenthood Act of 2015, and the Commemorative Coins Reform Act of 2015.

14. On his campaign website, he lists his governing principles as fiscal discipline; limited government; accountability; a strong national defense; “Cut, Cap, & Balance”; and “representing Utah to Washington, not Washington to Utah.”

15. He told Politico that he and his family like to “binge watch” the television show “Modern Family.”

16. Chaffetz has investigated security breaches by the U.S. Secret Service such as White House intruders. In retaliation, the agency leaked that he applied for and did not receive a job with them in 2003. “It’s a little bit scary. The Secret Service diving into my background as a sitting member of Congress?” Chaffetz told CNN on Thursday. “It’s not about me, but it is about: What are they doing over there? These people are trusted with guns by the president for goodness’ sake.”

17. Heritage Action, the sister organization of The Heritage Foundation, gave Chaffetz an 81-percent rating on its scorecard.

18. He recently voted against a continuing resolution that funded Planned Parenthood.

19. Chaffetz is chairman of the House Oversight Committee and a member of the House Judiciary Committee, two of the congressional committees currently investigating Planned Parenthood’s taxpayer funding.