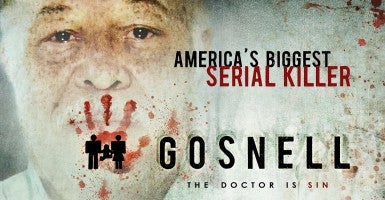 Ann McElhinney, co-producer of “Gosnell,” a film about abortionist Kermit Gosnell, came face to face with the convicted killer in an exclusive prison interview.

In 2013, Gosnell was convicted of violating Pennsylvania’s 24-week abortion limit, and for the first-degree murder of three infants and the involuntary manslaughter of an adult patient named Karnamaya Mongar.

In an interview with The Daily Signal, McElhinney said the experience was “not at all what I expected, on many levels.”

McElhinney spent two hours interviewing the subject of the film in the visitor’s room at his prison.

“The visitor’s room is open, you’re unprotected from the inmates,” she said. “It’s intimidating.”

Gosnell, despite being sentenced to serve life in prison, is “extremely convinced he won’t stay in prison forever.” He said he wants to run a triathlon “when” he leaves.

“I’m amazed at how pleasant his life is, the freedoms he has,” she said.

She said that the convicted killer is chatty and relaxed, and that “nothing fazes him.”

Asked about his crimes, Gosnell “has an answer for everything.”

“In his own version of the story, he’s a martyr, he’s part of a hounded class,” said McElhinney. She added that Gosnell compared himself to his “great friend” George Tiller, a late-term abortionist who was killed in 2009.

McElhinney, along with co-producer and husband Phelim McAleer, launched a crowdfunding campaign to make a film about Gosnell’s crimes in the face of what they describe as “censorship” by the media.

At the time, USA Today columnist Kirsten Powers criticized the media for devoting “precious little coverage” to a case “that should be on every news show and front page.”

McElhinney said Gosnell’s behavior during the interview was “weird.” He sat too close to her, and at one point broke into song.

She described leaving the prison with her husband feeling like the “walking wounded.” They didn’t speak for over an hour as they drove away.

“It was chilling,” she said. “I’m still recovering, actually.”

McElhinney said that the Gosnell film is in its casting phase, and is still raising funds.

“It’s a very exciting time for the film,” she said.