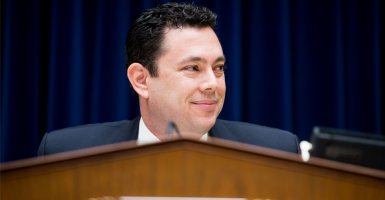 Chairman of the House Oversight Committee Jason Chaffetz is throwing his hat into the ring to replace John Boehner as speaker of the House, according to Politico.

The Utah Republican will face off against the current frontrunner, Majority Leader Kevin McCarthy, R-Calif., and Rep. Daniel Webster, R-Fla.

The news comes after McCarthy made controversial comments about the Benghazi committee investigation.

In response to those comments, Chaffetz said McCarthy should apologize.

Chaffetz was elected into Congress in 2008 and is currently leading investigations into whether Planned Parenthood should be stripped of its taxpayer dollars in light of a series of undercover videos released by the Center for Medical Progress.

Prior to being named chairman of the Oversight Committee, he played key roles in investigating the Benghazi terrorist attack, the Fast and Furious gun-running operation, IRS targeting of conservatives, and the Secret Service.

Chaffetz, 48, was criticized by the conservative wing of the Republican party in June after asking Rep. Mark Meadows, R-N.C., to resign from his chairmanship of the Government Operations subcommittee or be removed.

Conservatives complained of “a culture of punishment and fear” created by Boehner and his leadership team.

Shortly after asking him to resign, Chaffetz reinstated Meadows as subcommittee chairman.

“Obviously I believe in Mark Meadows or I would not have appointed him to this position in the first place,” Chaffetz said in a joint statement with Meadows. “It is in the best interest of the committee to move forward together. Therefore, I have asked Mark to continue in his role as subcommittee chairman.”

Boehner told Republicans last week he would be resigning from Congress, effective Oct. 30. This week, he announced that elections for the next speaker of the House will take place Oct. 8.