Russia Broke the INF Treaty (Again). What the US Should Do 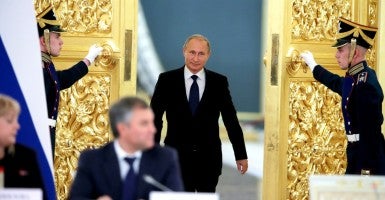 On Sept. 2, Russia tested a ground-launched cruise missile named SSC-X-8, in violation of the Intermediate-Range Nuclear Forces treaty, according to reporting by the Washington Free Beacon.

This test represents the latest in a long train of Russian violations of the 1987 treaty, which prohibits ground-launched ballistic and cruise missiles with ranges from 500 to 5,500 kilometers.

The Intermediate-Range Nuclear Forces treaty was a historic achievement. Before it, there had never been an arms control agreement that eliminated an entire class of nuclear weapons.

The U.S. State Department first officially accused Russia of violating the treaty in July 2014, but Russia has brushed off U.S. remonstrances and continues illicit missile tests.

Given Russia’s repeated violations of the INF Treaty and the U.S.’s inability to bring Russia back into compliance, it is time for the U.S. to withdraw from the treaty.

While Russia develops and tests intermediate-range missiles, the Obama administration has given only limited thought to integrating these systems into our own force posture and has refused to provide information about the violation and the threat it poses to the U.S. and allies.

A continuation of the status quo will allow Russia, which has made nuclear threats against NATO, to gain an advantage across an entire class of weapons.

The U.S. therefore cannot allow Russia to gain a strategic advantage in Europe that it can use to cow NATO and reassert its influence.

In the words of General Philip Breedlove, Supreme Allied Commander in Europe, “[a] weapon capability that violates the INF, that is introduced into the greater European land mass, is absolutely a tool that will have to be dealt with. It can’t go unanswered.”

In addition to withdrawing from the INF Treaty, the U.S. should take further steps to counter the Russian nuclear threat: modernizing its nuclear arsenal and committing to developing a comprehensive layered missile defense system.

The U.S. nuclear arsenal is aging, and no yield-producing tests have been conducted in over 20 years. The U.S. must modernize its arsenal in order to maintain a credible deterrent. Furthermore, the U.S. must develop missile defense systems capable of responding to new threats.

U.S. missile defense programs have suffered under the Obama administration. This trend must be reversed.

Russia’s treaty violations, its incursions into Georgia and Ukraine, and its recent actions in Syria point to a concerted Russian effort to re-establish itself as a global power. The Obama administration must stop dithering and take action to safeguard the security of itself and its allies.