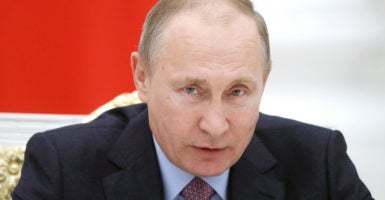 In late November, Russian President Vladimir Putin signed into law a measure rushed through the Duma to push back against the United States. As a result, reporters working for VOA and Radio Free Europe/Radio Liberty may be restricted from attending Duma deliberations and other official functions. (Photo: Metzel Mikhail/ZUMA Press/Newscom)

The Russian Duma is engaging in tit-for-tat with the U.S. government by designating American government-funded broadcasters Voice of America and Radio Free Europe/Radio Liberty as foreign agents.

In late November, Russian President Vladimir Putin signed into law a measure rushed through the Duma to push back against the United States. As a result, reporters working for VOA and Radio Free Europe/Radio Liberty may be restricted from attending Duma deliberations and other official functions.

Now in Russia, anyone who defies the Kremlin may find themselves branded a foreign agent. But it’s no coincidence that the Duma’s decision on VOA and Radio Free Europe/Radio Liberty comes soon after the U.S. Justice Department in September demanded that the Russian cable television entity RT (formerly known as Russia Today) register under the Foreign Agent Registration Act.

Additionally, the FBI is investigating the Russian propaganda website Sputnik for its activities.

How concerned should we be that free media is in a downward spiral as a consequence? Maybe not as much as might be surmised from news reports.

The real danger here is that the interpretation of what just happened gets blurred by moral equivalence between the U.S. and Russian governments.

The fact is that U.S. government broadcasting has been squeezed by the Kremlin for years and long since lost access to Russian airwaves, while RT and Sputnik have been operating freely in the United States, taking advantage of our constitutional liberties.

Under Putin, Russian information warfare has become a major weapon against the West, complete with fake news stories, internet trolls, and propaganda factories.

Furthermore, it is clear that RT and Sputnik—along with other Russian entities—did in fact act as foreign agents during the 2016 presidential election. They were investigated by the FBI starting in July for attempting to undermine and influence U.S. democratic institutions.

In January, a report by the Office of the Director of National Intelligence charged that in the 2016 U.S. presidential election, Russian media outlets “contributed to the influence campaign by serving as a platform for Kremlin messaging to Russian and international audiences.”

Offering no evidence that the Russian campaign actually swayed the election results, the report nonetheless clearly documented the way Russian outlets tried to undermine Americans’ faith in their democratic institutions.

No such charges can be truthfully leveled at the journalism produced by the U.S. broadcasters, even if the Russian government does not like what they broadcast. In fact, being thought of as part of a U.S. government agenda is pure anathema to most of the journalists and producers who work for them.

Whatever the Russian government chooses to call Voice of America and the rest, the Kremlin long ago took steps to curtail the access of ordinary Russians to news other than what the Kremlin deems fit for them to hear.