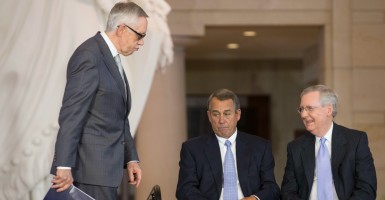 A government funding bill that stripped Planned Parenthood of its federal dollars failed to advance in the Senate today. (Photo: Michael Reynolds/EPA/Newscom)

A government spending bill that prohibited Planned Parenthood from receiving federal dollars for one year and kept the government operating failed in the Senate today.

The continuing resolution, introduced earlier this week by Senate Republican leaders, fell short of the 60 votes needed to advance in the upper chamber after senators blocked the measure, 47-52.

Republican Sens. Tom Cotton of Arkansas, Kelly Ayotte of New Hampshire, Rand Paul of Kentucky, Dean Heller of Nevada, Lisa Murkowski of Alaska, Mark Kirk of Illinois, Ben Sasse of Nebraska and Susan Collins of Maine all voted against advancing the measure. Democratic Sen. Joe Manchin of West Virginia was the only Democrat to vote “yes.” (See how your senators voted below.) The vote occurred just hours after Pope Francis delivered a historic address before a joint session of Congress.

The bill would have funded the government at a rate of $1.017 trillion annually until Dec. 11, which Senate GOP leaders said gave Congress ample time to negotiate a budget deal with President Obama. The continuing resolution also called for a one-year moratorium on federal dollars for Planned Parenthood, a provision Senate Democrats and the White House objected to.

Just hours before the vote on the stopgap funding measure, the Obama administration issued a veto threat of the continuing legislation, saying it “contains highly objectionable provisions that advance a narrow ideological agenda”—a reference to the amendment defunding Planned Parenthood.

Conservative lawmakers in both the House and the Senate called on Republican leaders to strip Planned Parenthood of its federal funding through the continuing resolution after a series of undercover videos from the Center for Medical Progress were released showing Planned Parenthood officials discussing the sale of body parts from aborted babies.

Though the government funding measure proposed addressed the group’s access to taxpayer dollars, many conservatives felt today’s vote was just for show.

“Today’s failed show vote shows that [Majority] Leader McConnell and Speaker Boehner are unwilling to fight for a practical solution that funds the government and redirects funding for Planned Parenthood,” Dan Holler, spokesman for Heritage Action for America, told The Daily Signal. “Conservatives must pledge to vote no on any spending bill that includes funding for Planned Parenthood.”

In an op-ed in Politico ahead of today’s vote, Sen. Ted Cruz, R-Texas, challenged Senate Republican leadership to force Democrats to vote against government funding bills.

“If Republican leadership actually tried to win, we would vote on one bill after another funding specific parts of the federal government,” Cruz said. “Fund it all, and let Democrats explain why they are filibustering funding for vital services in order to give $500 million to a private organization under criminal investigation.”

Cruz’s statement was echoed by that of Rep. Jim Jordan, R-Ohio, chairman of the conservative House Freedom Caucus.

>>> Commentary: There Is Only Way to End Federal Funding of Planned Parenthood. Here’s Why.

“If President Obama and Harry Reid want to shut down the government over an allegiance to one particular organization, instead of funding our troops and funding women’s health care, then that’s a sad commentary on their priorities,” Jordan said in a statement to The Daily Signal. “But we shouldn’t allow them to get their way without a fight.”

Senate Majority Leader Mitch McConnell, R-Ky., is expected to introduce a “clean” continuing resolution—one that does not strip Planned Parenthood of its federal funding—later this afternoon. The Senate is expected to vote on that funding bill Monday.

In anticipation of the clean continuing resolution that funds Planned Parenthood, Heritage Action for America, the lobbying arm of The Heritage Foundation, called on lawmakers to oppose the government funding bill.

“Put another way, the Senate’s unwillingness to fight the president on the issue of abortion is being blessed by House Speaker John Boehner,” Heritage Action continued.

The House Republican conference is meeting tomorrow to discuss the stopgap funding measure. However, any continuing resolution that allows for Planned Parenthood to receive federal dollars is unlikely to gain support from conservatives in the House.

Earlier this month, the House Freedom Caucus announced it would not support a continuing resolution that does not defund Planned Parenthood.

“Given the appalling revelations surrounding Planned Parenthood, we cannot in good moral conscience vote to send taxpayer money to this organization while still fulfilling our duty to represent our constituents,” the group said in a statement. “We must therefore oppose any spending measure that contains funding for Planned Parenthood.”

Jordan, the group’s chairman, called on House leadership to bring a continuing resolution defunding Planned Parenthood to the floor.

“The House of Representatives has both the constitutional authority and legislative power to act now, since House leadership could use its same-day rule authority to bring a continuing resolution to the floor for a vote this week, and we should do so,” he said. “The fact is, we do not know how a fight over this issue will play out. You don’t know the outcome until you try. We need to have a debate about this, and the American people will decide whether or not this organization, with what we know now, deserves Americans’ tax dollars.”

This post has been updated to include the roll call vote on the motion to advance the continuing resolution.