There Is Only One Way to End Federal Funding of Planned Parenthood. Here’s Why. 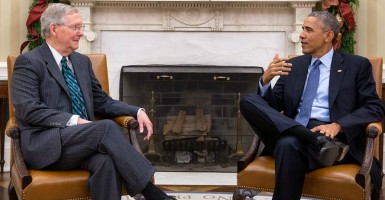 If GOP leadership doesn't defund Planned Parenthood through the continuing resolution, they are letting the Democrats win. (Photo: The White House/Sipa USA/Newscom)

Why, oh why, is it so hard for Republicans to do the right thing and put up a good fight to end taxpayer funding of Planned Parenthood?

On this issue, and others before it, it seems the GOP leadership has decided that principles and campaign promises must succumb to the “what we believe is politically possible” line of thinking.

Translation: They are loath to even consider any legislation that President Barack Obama threatens to veto or that Senate Democrats threaten to filibuster.

Further translation: Democrats are winning the game of chicken…again.

And this is why the current battle over legislation to keep the government funded and running—a continuing resolution—is causing great heartburn among GOP congressional leaders.  They say Obama will veto any continuing resolution that also ends taxpayer funding of the nation’s largest abortion provider (even though those funds would be redistributed to other federally qualified health clinics that provide more health services for women) and that it would be too hard to get through the Senate anyway because Sen. Harry Reid and Democrats would block a vote on it.

All those concerns are legitimate and real.

But here is what is also real: there is only one way to truly end federal funding of Planned Parenthood, and that is to defund it in any continuing resolution taken up by Congress. Here is why.

Despite all the other “options” being bandied about on Capitol Hill, the only way to keep over $500 million taxpayer dollars from going into the pockets of Planned Parenthood, who we now know via a series of undercover videos is also harvesting and selling the organs and body parts of unborn babies its clinics abort, is to take away next year’s funding before Planned Parenthood’s operatives can get their hands on it.

Those wanting to pass a “clean” continuing resolution and avoid the debate now say, “We’ll take care of this in January or February when Congress returns early next year.”

Are we really going to fall for that again?

Remember last year, right after the November midterm election, when we were told the newly GOP-controlled Congress would checkmate Obama on his executive amnesty moves—but they just couldn’t do it during the end-of-year budget battle, and we had to wait until February?

Sound familiar? As you may recall, February came and went, and they were able to do nothing, because they had missed the window to press Obama’s hand.

Even if Congress could pass such standalone legislation in February directing Health and Human Services, the agency that funds Planned Parenthood, to stop sending them any more dollars, it is very likely that HHS—knowing Planned Parenthood might be defunded—would distribute the funds well before such legislation passed.

If Congress passes a continuing resolution authorizing government spending for the next fiscal year that is basically a carbon copy of this past year’s budget, HHS will be given the same amount of money it was given last year, and the agency can issue a check on day one of the next fiscal year to Planned Parenthood. That could be just weeks from now in October, when the next fiscal year is supposed to begin, or later this year, or in January if the battle over the resolution drags out.

Regardless, if the continuing resolution has the funding in there, there is no reason HHS has to take its sweet time to distribute it. It can do so immediately, and Congress will be johnny-come-lately in doing anything about it.

Another legislative tactic, introduced recently by Rep. Diane Black, R-Tenn., is a one-year ban on federal funding of the abortion giant while Congress investigates the scandal.  Despite the fact that the videos are really all the evidence one needs to show the grisly activities our taxpayer dollars have been underwriting, here’s why Black’s one-year ban, even if were to pass, likely would still not stop the flow of dollars.

If a standalone bill, such as the one just referenced, says you can’t spend such dollars, but a continuing resolution for next year also passes that contains those dollars, it would allow HHS to decide which funding directive to follow. The agency could decide either to follow the directive from Congress to not fund Planned Parenthood or to spend the funds allocated to Planned Parenthood in the continuing resolution.

Anyone want to make a bet on what the Obama administration’s HHS will do?

Likely the same thing that Obama has done on immigration and the Iran Nuke deal—ignore Congress’s directive and will.

Obama completely went around Congress previously in granting legal status to millions of immigrants here illegally, and most recently, he signed the Iran Nuclear Agreement Review Act, commonly referred to as Corker-Cardin, and then promptly ignored it in moving ahead to seal the deal.

Why would we expect any difference in the case of funding one of the left’s favorite organizations and causes?

Granted, this will not be an easy fight. But, if willing, the GOP can make the case that taxpayer dollars for such gruesome, immoral, and potentially illegal activities should end and end now. They can do so by going on offense and, for once, forcing Senate Democrats and Obama to defend their indefensible position.

Sometimes, regardless of the stakes, you have to do the right thing simply because it is the right thing to do. Despite the timidity of GOP congressional leadership, doing the right thing in this case just might be a major reason they win what they seem to covet more than anything else—the 2016 election.