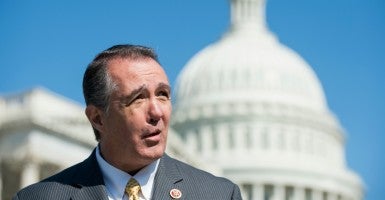 Congress' first hearing on Planned Parenthood will take place Sept. 9. “Planned Parenthood and its executives must answer for the alleged atrocities brought to light in the videos by the Center for Medical Progress,” said Reps. Bob Goodlatte and Trent Franks (above) in a joint statement. (Photo: Bill Clark/CQ Roll Call/Newscom)

Congress will hold its first hearing on the Planned Parenthood scandal following the August recess, the House Judiciary Committee has announced.

The first of a series of hearings, titled, “Planned Parenthood Exposed: Examining the Horrific Abortion Practices at the Nation’s Largest Abortion Provider,” will take place on Wednesday, Sept. 9.

The Center for Medical Progress has released a series of undercover videos depicting Planned Parenthood officials discussing the harvesting of fetal organs at the organization’s affiliates.

In a joint statement, Rep. Bob Goodlatte, R-Va., chairman of the House Judiciary Committee, and Rep. Trent Franks, R-Ariz., chairman of the Constitution and Civil Justice Subcommittee said, “Planned Parenthood and its executives must answer for the alleged atrocities brought to light in the videos by the Center for Medical Progress.”

For the past two months, the House Judiciary Committee has been investigating the alleged acts of Planned Parenthood and its affiliates, and now the American people will have a chance to understand just how horrific these practices are to the unborn.

We are pleased to have the opportunity to question a panel of experts on this issue in order to ascertain how Planned Parenthood may have violated federal laws in the course of its alleged practices, and the atrocities associated with altering abortions in order to obtain the body parts of fetuses.

This hearing is the next step in the committee’s ongoing investigation into Planned Parenthood and part of the committee’s commitment to fighting for the rights of the unborn.

According to a press release, the hearing will be available to watch online.

Spokespersons for Planned Parenthood have denied illegal conduct throughout the controversy, and said they are merely reimbursed for the cost associated with donating fetal tissue.

The House Committee on Oversight and Government Reform and the House Energy and Commerce Committee are also investigating Planned Parenthood.