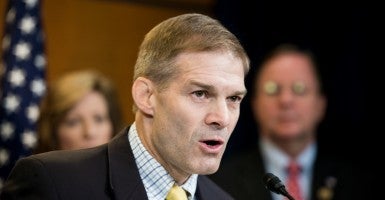 The House Freedom Caucus has decided to oppose any spending bill that grants taxpayer funds to Planned Parenthood. In an interview for C-SPAN, House Freedom Caucus Chairman Jim Jordan said the organization "should not get another dime," according to The Hill. (Photo: Bill Clark/CQ Roll Call/Newscom)

The House Freedom Caucus, a group of conservative lawmakers, has announced that it will oppose any spending bill that grants taxpayer funds to Planned Parenthood.

In a statement, members of the group said:

Given the appalling revelations surrounding Planned Parenthood, we cannot in good moral conscience vote to send taxpayer money to this organization while still fulfilling our duty to represent our constituents. We must therefore oppose any spending measure that contains funding for Planned Parenthood.

Lawmakers have until the end of the month to pass a spending bill in order to avoid a government shutdown.

McConnell said he is “anxious” to stop distributing funds to Planned Parenthood but “the honest answer of that is that’s not going to happen until you have a president who has a similar view.”

“It’s better to be honest with the American people and say, ‘That won’t get it done.’”

He added that suggestions to the contrary are “misleading people into thinking it’s possible” to defund the organization.

In an interview for C-SPAN’s “Newsmakers” that has not yet aired, Rep. Jim Jordan, R-Ohio, chairman of the House Freedom Caucus, said that Planned Parenthood “should not get another dime,” according to The Hill.

Jordan said conservatives could win a looming battle over a government shutdown with the right tactics.

“We just need to make that case in a compelling, repetitive way, over and over again, so the American people clearly understand what’s at stake here,” Jordan said.

During a July press conference, White House press secretary Josh Earnest said “the President certainly will not support another effort by Republicans to try to defund an organization that offers important and needed health care services to millions of women across the country.”

Planned Parenthood faces allegations that it sells aborted fetal organs for profit following the release of a series of undercover videos depicting staffers discussing the harvesting of fetal organs at the organization’s affiliates.

Spokespersons for the organization have denied illegal conduct and defended their tissue donation program.