Can Shakespeare Heal? One Director’s Quest to Help Treat PTSD 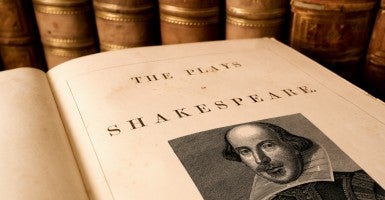 Before he met Jaclyn McLoughlin, combat veteran Androcles Scicluna passed most days focused on survival, picking abandoned bottles and milk cartons out of trash cans and curling up in whatever public dry spot he could find to sleep at night.

“I had to leave [the armed forces] for medical reasons, and after that, you know, everything was bad,” said Scicluna, who served with the British army. “Being used to army life, and suddenly coming to civilian life, it wasn’t easy for me.”

“It wasn’t any good life,” he added. “I mean, I had already experienced death … I just stayed on my own, kind of in hibernation.”

According to Scicluna, today an open, friendly, and downright jolly man originally from Malta, all of that changed in 2011, when he was approached by a government affairs officer who pointed him in the direction of Jaclyn McLoughlin, who goes by Jackie, and her burgeoning theater group, the Combat Veteran Players.

At the time, McLoughlin, a Ph.D. student, was just beginning to experiment with the possibility of helping veterans work through their problems, including post-traumatic stress disorder (PTSD), through theater.

According to the Pentagon, more than 155,000 American active-duty and veteran men and women suffer from PTSD. It is estimated that between 11 and 20 percent of all Operation Iraqi Freedom and Operation Enduring Freedom veterans have PTSD.

“People like me sometimes are depressed over our present situation and suddenly, when we jump into a Shakespearean character, that’s like leaving our own problems away and getting into another person,” Scicluna said. “Once we finish the acting, being the character, and get back into our own, somehow the kind of depression has moved out.”

Four years later, Scicluna (who adores the show “Hawaii Five-0” and rattles off American history factoids as though he is a guest on “Jeopardy!”) has appeared in three lauded Shakespearean performances in London and holds down two part-time jobs, one as a tour guide and another as a caretaker.

He calls himself and his fellow players a “band of brothers,” attributing the “better state” he is in to his work with McLoughlin.

“The most important thing is the meeting,” he said. “Getting all of us together, all ex-servicemen and women knowing each other, doing physical exercises, learning to project our voice, but also, you know, the kind of friendship we’ve had with one another.” While McLoughlin admits that her heart remains with her “originals” in London (four or five men who helped launch the program), circumstances have brought her to the States, specifically Maryland and Virginia.

It’s 7 p.m. on a summer night, and Dan*, a 6-foot-3, 250-pound African-American serviceman, is prancing around the upstairs community room at the Warrior and Family Center at the Fort Belvoir Army installation in Virginia’s United Service Organization (USO) hub, garnering plenty of laughs.

“I’m thinking about developing some sort of foxy walk, like a sneaky walk,” he says with a grin.

Having just been tasked with adopting the physicality of the Shakespearean character he will play in an upcoming performance of the British playwright’s “The Comedy of Errors,” Dan appears more than content to have momentarily traded in his faded camouflage backpack and Mr. Pibb for a dog-eared script and the opportunity to let loose.

Dan is one of eight active, veteran, or medically retired servicemen and women who have turned up for the night’s three-hour-long acting class with McLoughlin.

And while Dan may be one of the more boisterous players, it’s clear by the end of class, as Specialist Moises Burgos begins collecting phone numbers and email addresses so the group can stay in contact, that a dedication to the craft and their forthcoming performance is building.

“This is something that normally, someone like me … I grew up in inner-city Philadelphia, and acting was not the biggest thing,” said Burgos, who has served in the Army for 12 years. “In the office or on post, you have to behave a certain way. In class, you get to be silly on purpose and have some fun.”

Seeing men and women so typically associated with strength, hierarchy, and heroism allow themselves to be “silly” is equal parts unsettling, heartwarming, and, yes, funny—not altogether unlike “The Comedy of Errors” itself. But to McLoughlin, who launched the Combat Veteran Players along with the assistance of leading British non-profit Combat Stress in London six years ago, the combination of veterans and theater makes perfect sense.

When “The Comedy of Errors” opens its doors, it will mark success for McLoughlin’s years-in-the-making attempt at bringing a growing program she fostered for veterans in England to the States.

Jackie McLoughlin with the original Combat Veteran Players in London. (Photo: The Stage)

For the Colorado native, if it works, it will mark a homecoming.

McLoughlin, once an actress herself, first moved to London to get her master’s degree at the Royal Academy of Dramatic Art in 2008. In early 2009, while researching the concepts of drama therapy and applied theater (McLoughlin is quick to point out she is neither a therapist nor clinician), she wrote an essay on the possibilities of Shakespeare and veterans with PTSD.

“It was a thought I had, basically, because I was thinking breath control of delivering the verse would sort of physically manifest itself, as far as calming a heart rate,” said McLoughlin, a director by trade whose perceptive, introspective personality suggests she was near made for the job. “After a little bit of time working in the commercial world, I revisited the idea. That’s when I approached Combat Stress [about developing a Shakespeare program].”

McLoughlin met Walter Busuttil, Combat Stress’s director of medical services, who assisted her in securing a space for rehearsal and effectively became the program’s “right-hand man.” She selected a lighthearted comedy to begin. Then came the hard part.

“You say theater, these guys run. You say Shakespeare, they run further,” McLoughlin said, words spilling out as her mouth tries to keep pace with her memories. “Well, I was doing ‘Midsummer Night’s Dream.’ So then, I’m the little American girl talking about fairies and love potions and, as you can imagine, I wasn’t exactly getting people running out of the woodwork to do this.”

McLoughlin stayed with it, steadily gaining traction and group members through word-of-mouth promotion. “It took a lot of persistence, a lot of lonely days just sitting in the rehearsal room and hoping somebody would walk in, a lot of walking up at various facilities, walking up to someone and just talking to them.”

She wound up with a group of roughly ten men, including Scicluna. Two were familiar with Shakespeare. The men dedicated themselves to hitting their marks and delivering their lines, and McLoughlin secured a performance at London’s now closed Old Vic Tunnels a year after originally gathering the group together.

In those last weeks of rehearsal, McLoughlin honed in on a work ethic and team player mentality she attributes entirely to the military’s high standards, refusing to dumb down her direction for lack of experience.

“If anybody tells you, ‘Oh, it’s OK, you can hit this mark and not that one,’ to me, that’s patronization, and that’s not doing anybody any good,” she said. “But we also find that balance of, it’s not life or death, and something will go wrong.”

Their opening performance was so well-received that it secured an invitation for residence at the Old Vic Tunnels. Soon, the Combat Veteran Players were invited to perform at the Globe Theatre and found themselves fielding media requests.

In the years since that first performance, the Combat Veteran Players have put on productions of “Hamlet” and “Henry V” in London and have traveled to perform throughout England. They have been the subject of BBC specials, newspaper articles, and podcasts. Currently, they are rehearsing “Twelfth Night.”

McLoughlin also built up her support arsenal, working with various veteran’s affairs organizations to bring in the appropriate help when needed.

A major determinant of whether McLoughlin, who has been back in the States only a few months, will succeed in going global, so to speak, is whether she will be able to lock in “long-term, buy-in funding.” But at least, she insists, she has faith—and supporters.

“[Jackie and I] met probably late summer or mid-summer last year,” says Ashy Palliparambil, program specialist for the USO of Metropolitan Washington-Baltimore’s Art and Music Programs. “We were able to see how successful the program was in London, and talking with her, she wanted to try the same approach here.”

Palliparambil and McLoughlin worked together, eventually getting biweekly classes set up this summer at the USO Warrior and Family Centers at Fort Belvoir and the Naval Support Activity Bethesda base.

“These [USO] locations are very particular or special in that they are right next to where service members are recovering from their injuries of war,” Palliparambil says. “When a lot of people hear that, they think of the amputee. But something important to note is that while there is a portion of service members coming back with physical injuries, a lot more are coming back with invisible wounds like a traumatic brain injury or post-traumatic stress.”

For her part, Palliparambil believes that the trial run has been a success. “Right now, the population seems to have really gravitated towards these classes,” she said..

Indeed, McLoughlin acknowledges that recruitment in the States has been much easier, despite London being Shakespeare’s birthplace. “It was a greater part of a year to get five people in a room when I started in the U.K.,” McLoughlin said. “In our first rehearsal here I had something like six people in the room.”

Another welcome addition to the class? Women. It took McLoughlin years, plural, to get women involved in London.

“Jackie does an excellent job making learning the craft of acting fun,” says retired Lt. Col. Kim Seldon, a 24-year combat veteran who served in Bosnia, Saudi Arabia, and Iraq and has attended classes for several weeks. “It allows the expression of emotions in a safe environment. We can do things without the judgment of others.”

In a few weeks, McLoughlin will return to London and her troupe there as she figures out whether or not the program in the States will really take off in a way that would make all the travel worth it. She remains determined.

“I’ve seen this work; I know it works,” she said. “That makes it less of an experiment when you’re able to say, ‘I’ve had these outcomes and this real impact. Let’s just do it here.’”