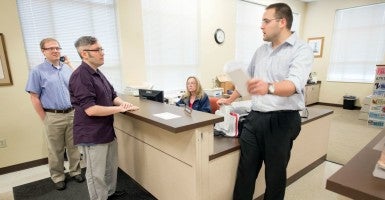 In the wake of the Supreme Court’s ruling redefining marriage throughout the country, there’s an open question as to what happens to people who believe marriage is the union of husband and wife.

Kim Davis, the clerk for Rowan County, has a sincere religious belief that marriage is the union of husband and wife, and says she cannot in good faith issue a marriage license to a same-sex couple. As a result she stopped issuing marriage licenses to all couples (both same-sex and opposite-sex) after the Supreme Court’s marriage ruling in June.

In this way she thought she would avoid the charge of discrimination.

She also wouldn’t allow any other clerks in her office to issue marriage licenses. The result: no one could get a license in Rowan County.

This created a problem. The citizens of Rowan County have a right to receive in a timely and efficient manner the various government provisions—including licenses—to which they are entitled.

The law requires a reasonable accommodation that does not place undue hardships on the employer—in this case the government. Saying your religion requires your entire office to stop issuing marriage licenses to everyone, while perhaps a sincere belief, cannot be reasonably accommodated without placing undue hardships on the citizens unable to receive their licenses in their county and forced to drive to another.

That the clerk in Rowan County couldn’t be accommodated does not mean that no clerk should ever be accommodated. Unfortunately, some activists on the left think all wedding professionals and civil servants should be forced to violate their beliefs about marriage or find a new line of work.

As I explain in my new book, “Truth Overruled: The Future of Marriage and Religious Freedom,” there are ways in which public policy can create a win-win situation: where all eligible couples can receive a license and where as many employees as possible can be accommodated.

Again, it’s a win-win for everyone. No one loses anything.