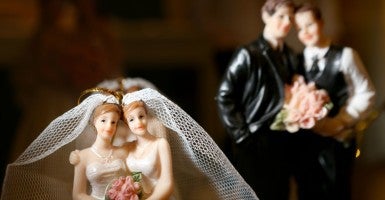 A Kentucky judge has granted a temporary stay to a county clerk so that she doesn’t have to issue marriage licenses to same-sex couples while her case is appealed.

Davis, a Christian, has said she believes in the biblical definition of marriage between one man and one woman. Davis has been sued for her objection to issuing licenses.

But on Monday, according to Louisville’s Courier-Journal, Bunning granted Davis a temporary stay while she appeals for a complete stay from the 6th Circuit.

“Because Davis’ ‘no marriage licenses’ policy likely infringes upon plaintiffs’ fundamental right to marry, and because Davis herself is unlikely to suffer a violation of her free exercise rights if compelled to issue marriage licenses, the court concludes that the public interest is not served by granting a stay,” Bunning wrote, according to the Courier-Journal. But Bunning also found that “in recognition of the constitutional issues involved, and realizing that emotions are running high on both sides of the debate, the court finds it appropriate to temporarily stay this order pending review of defendant Davis’ motion to stay by the 6th Circuit.”

In an interview with The Daily Signal, Davis’ lawyer, Roger Gannam, senior litigation counsel at Liberty Counsel, an organization that provides free legal assistance in religious liberty cases, said that Bunning’s temporary stay is a “minor reprieve” for his client.

Gannam said that Rowan County’s marriage licenses are issued “under her name and her authority, so that is her religious objection.”

Gannam argued that the Supreme Court’s ruling requires only that states treat same-sex marriage as they do traditional marriage. Under Kentucky law, marriage licenses issued in any county are valid statewide. Therefore, there are over a hundred offices where the plaintiffs could obtain a marriage license.

“It’s certainly not the case that the plaintiffs are unable to get married.”

Gannam said that Davis’s religious beliefs should be accommodated.

“This is not something I decided because of this decision that came down,” Davis has testified in court, according to the Associated Press. “It was thought-out and, you know, I sought God on it.”

The plaintiffs have argued that as a county clerk, Davis took an oath that she must uphold.

Roger Severino, the director of the DeVos Center for Religion and Civil Society at The Heritage Foundation, said, “When North Carolina faced a similar problem with its clerks, it passed a law allowing civil servants with religious objections to recuse themselves from all marriage licensing functions while at the same time ensuring that every qualified couple would still receive a timely marriage license.”

“It was a win-win and shows that the conscience rights of civil servants can and should be respected even after the Supreme Court’s sweeping redefinition of marriage,” Severino said.

The AP reports that “Davis faces fines and possible jail time for contempt of court if she loses her challenge and still refuses to issue licenses.”