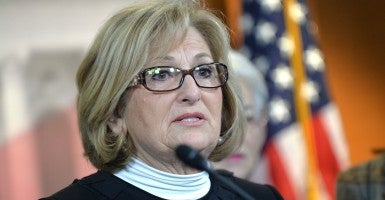 “There is no reason in this world” why federal money should be spent on Planned Parenthood, said Rep. Diane Black, R-Tenn., while on air Monday with former Alaska Gov. Sarah Palin.

Black, who has been a nurse for over 40 years, told Palin—the guest host this week for One America News Network’s “On Point” talk show—that other health service providers “do a wonderful job.”

“Planned Parenthood got called out several years ago when they declared they did mammograms,” said Black. “We saw they didn’t do mammograms.”

Planned Parenthood, the nation’s largest abortion provider, receives over $528 million a year in taxpayer dollars, according to Palin.

In the Senate, Joni Ernst, R-Iowa, filed a bill to defund the organization. Palin says she is proud of these “two Mama Grizzlies” and their fight to “defund this horror.”

“No longer, by the way, do we give money to Planned Parenthood in the state of Tennessee,” Black said. “We were able to defund them when I was still in the state Senate … it should be done all the way across this country.”

The nationwide discussion to defund Planned Parenthood comes on the heels of the release of eight behind-the-scenes videos by the Center for Medical Progress.

In her conversation with Palin, Black thanked the Center for Medical Progress and said it is important for the American people to see “the heart and the soul” behind Planned Parenthood.

“In the meantime, we need to investigate Planned Parenthood and really find out what’s going on behind their doors,” Black said.

The bill currently has more than 160 co-sponsors along with the support of many citizens who have rallied in protest of Planned Parenthood.

If Congress takes action to defund the organization but gets vetoed by President Barack Obama, Black said actions could still be taken through the appropriations process.

“It is by the American people standing up and just insisting that their dollars not go to these despicable organizations … that’s when we’re going to really change what’s happening in this country.”