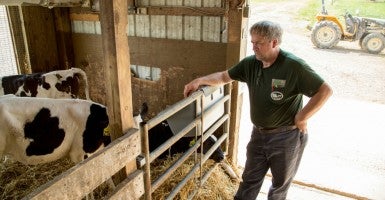 The Internal Revenue Service seized $63,000 from Frederick, Md., dairy farmers Randy and Karen Sowers under civil asset forfeiture. Now, a bipartisan group of lawmakers is asking the Treasury Department to return the money it kept after the couple settled with the government. (Photo: Institute for Justice)

A bipartisan group of lawmakers on the House Ways and Means Oversight Subcommittee is coming together to ask the Treasury Department to return nearly $30,000 it seized from Maryland dairy farmers in 2012.

The lawmakers also asked Lew to review similar cases and return money seized by the tax agency under the practice.

“Treasury still holds funds seized from innocent business owners who settled their cases only because they could not afford to do otherwise,” the letter said. “As the Treasury secretary, you have the opportunity to right the wrong done to these small business owners.”

Three years ago, the IRS seized $63,000 from the Sowers’ bank account under civil asset forfeiture. The tax agency alleged that the couple committed structuring violations, which involves making consistent cash deposits or withdrawals of under $10,000 to avoid bank reporting requirements.

The money deposited into the farm’s account, though, came from customers who paid in cash at the local farmer’s market.

The Sowers were never charged or convicted of a crime.

While the couple was in the midst of settlement negotiations with the government, hoping to have most of their money returned, Randy Sowers spoke with a reporter from The City Paper in Baltimore, Md., about his experience with structuring and civil asset forfeiture.

On the day the article was published, Stefan Cassella, the assistant U.S. attorney overseeing Sowers’ structuring case, told the family’s lawyer he had a “problem” and was no longer willing to negotiate a settlement amount, according to court filings.

The Sowers did eventually settle, forfeiting $29,500 to the federal government.

Though the Sowers had some of their money returned, the couple filed a petition with the government last month asking for the remainder of it back.

The family’s case is just one of many that has emerged in recent years involving civil asset forfeiture. Under the tool, law enforcement agencies have the authority to seize money and property if it’s suspected of being connected to a crime.

Forfeitures that stem from structuring violations fall under a subset of civil asset forfeiture laws that oversee cash transactions.

The procedure began as a way for law enforcement to target those involved in drug trafficking and money laundering. However, a number of innocent property owners like the Sowers have come forward after having money seized without ever being charged or convicted of a crime.

In response to reports identifying innocent Americans who had money seized due to structuring violations, the IRS changed its policy regarding such seizures in October 2014.

Under the new policy, the tax agency could only pursue structuring cases in which the money stemmed from illegal activity.

In their letter to Lew, the bipartisan group of lawmakers pointed to the IRS and Justice Department’s policy changes as the reason why the Sowers’ money should be returned.

“The IRS’s October 2014 policy change is tantamount to an admission that it never should have seized funds that were not associated with an illegal source,” the lawmakers said in their letter to Lew. “The Sowers and others like them should be treated with the same fairness applied to cases going forward.”