We Can Figure Out How to Control Drones in the U.S. 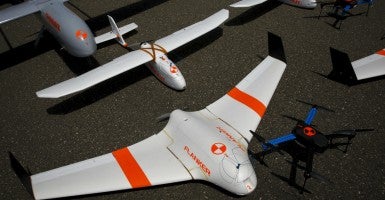 Until recently, most of our attention on drone wars has been about the debate over us going after bad guys with armed flying robots.  Indeed, America’s drone wars are bigger than ever. The U.S. just announced it will start conducting armed drone flights against terrorists in Syria from the American airbase in Turkey.

Now, however, the news is all about drones diving on us.

Just a few days ago, a commercial plane heading into JFK reported almost colliding with a drone lingering near the airfield. That’s not close to being the first story of an accidental meeting between a plane and a drone. In California, two firefighting planes had to divert because someone was sightseeing over the scene with a hobby drone.

If those stories don’t pique your worry meter, last week Homeland Security issued an intelligence assessment that commercially available recreational drones “could be used by adversaries” as weapons.

Even the armed forces are worried. The U.S. military is in the middle of holding its annual live-fire drill where it practices shooting down enemy drones.

Get used to these stories. Drones are the new normal—soon everybody will be flying them everywhere.

We figured out managing manned aircraft. With common sense, America ought to be able to figure out how to keep American skies friendly with drones darting about the clouds as well.