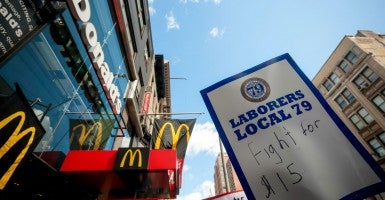 Construction workers join fast food workers at a protest in front of a McDonald's restaurant in New York on Saturday, April 4, 2015. (Photo: Richard B. Levine/Newscom)

Nick Hoffman is member of the Young Leaders Program at The Heritage Foundation.

The Los Angeles city council will vote this week on exempting collectively bargained wages from its new $15 an hour minimum wage law.

That’s correct – if unions get their way, only unionized employers will be able pay their employees less than $15 an hour.

Over the past year, “Fight for 15” has swept the nation with labor unions organizing strikes in an effort to raise the minimum wage to $15 an hour.

But now that Los Angeles unions got what they lobbied for, they want to exempt their members from the higher minimum wage.

Ironically, the labor unions fought against exemptions for restaurants and other small businesses burdened by the hike.

Unions argued they shouldn’t get special treatment because the higher wages would benefit everyone.

“raising the minimum wage in L.A. County would help lift county workers, contractors and workers in unincorporated areas out of poverty and stimulate the economy.”

Now, Hicks thinks that organized companies deserve an exemption. In a statement he argued,

“This provision gives the parties the option, the freedom, to negotiate that agreement. And that is a good thing.”

Such special treatment is hard to square with Hicks’ principled arguments for the wage hike.

But it would certainly help unions gain new members and more dues. Businesses could only pay lower wages by hiring their members – quite the incentive to unionize.

Unions have used this novel organizing approach in several other cities.

Many hotels decided to unionize. And the hotel union UNITE-HERE saw a 53 percent membership increase in LA and an almost 75 percent increase in San Francisco.

Other hotels cut back operations to no longer count as “large” hotels under the ordinance. One hotel in Long Beach reduced the number of rooms it rented – despite having them fully available. Fewer rooms of course meant fewer jobs for workers.

Regardless of one’s opinion on a $15 an hour minimum wage, union-only escape clauses are an appalling special-interest handout.

It allows unions to boost their bottom lines by negotiating for lower pay.

If $15 an hour is too onerous for unionized businesses it shouldn’t apply to non-union businesses either.

And if unions think $15 an hour appropriate city-wide then unions should not make themselves the only low-wage option.