Do Families in Red or Blue States Have Greater Stability? What a Study Found. 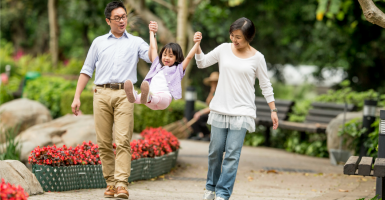 Contrary to what has been accepted as conventional wisdom, America’s red counties have a higher percentage of stable families than those in blue counties.

According to a study from the Institute for Family Studies, red counties tend to have more married adults, more children born within marriage and higher levels of children living with both biological parents than blue counties.

“The reddest counties have higher rates of family stability, which is surprising because red counties, especially in the South, tend to have higher divorce rates,” said W. Bradford Wilcox, senior fellow with the Institute for Family Studies and author of the study. “But what seems to be happening here is that non-marital childbearing has emerged as a bigger engine of family instability than divorce in America. And this brief indicates that non-marital childbearing is lower in redder counties.”

“The most stable families, the homes with two parents to nurture their kids, are found in the liberal strongholds along the East and West Coasts,” National Public Radio’s Neal Conan said during an interview with Cahn and Carbone. “The red states, the heartland states, if you will, the states that tout family values or celebrate family values, there are religious and traditional [values there] that you [Cahn and Carbone] say increase the likelihood of having less stable families.”

But Wilcox said the state-level data addresses only part of the equation because it does not explain the “connection between family stability and political culture” at the local level.

“At the local level, red counties typically enjoy somewhat stronger families than do blue counties on at least three measures worth considering: marriage, non-marital childbearing and family stability,” Wilcox wrote in the report.

“The bottom line: The marriage advantage in red America helps explain why children in red counties are somewhat more likely to enjoy stable families than are children in blue counties,” he added.

Wilcox acknowledged there was no “overwhelming advantage” here, but he said it does dissolve the notion that blue states produce greater family stability. He said blue states achieve this through education and delayed parenthood, but red states have marriage on their side contributing to family stability.

“We can’t overlook the important need to strengthen marriage, particularly in communities where marriage is struggling or has fallen apart,” Sheffield said. “Marriage benefits men, women, children and society as a whole. Leaders at every level should look for ways to build a healthy marriage culture so that as many children as possible have the gift of being raised by their married mother and father in a stable, healthy family.”