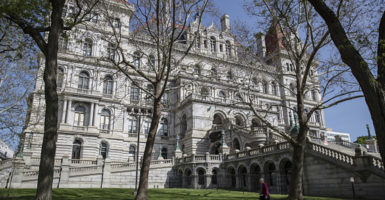 New York Gov. William Sulzer took on the Empire State’s version of what Trump supporters call the “swamp” in 1913, and Tammany Hall bosses wielded enough power to have him impeached and removed. Pictured on May 22: the State Capitol in Albany, New York. (Photo: Victor J. Blue/Bloomberg/Getty Images)

This Manhattanite came to office with a big reform agenda, ready to toss out the old establishment and fight corruption. He asserted: “Political conventions must go.” And: “Disgraceful secret alliances between special privileges and crooked politics must cease.”

But reforming an old, entrenched system had its price. The system pushed back with impeachment, prompting the elected chief executive to respond: “I impeach the criminal conspirators.”

It may sound similar to the current Washington saga and House Democrats’ impeachment of President Donald Trump. But this was more than a hundred years ago in 1913 in Albany, New York, where Gov. William Sulzer took on the Empire State’s version of the “swamp.” It was known as Tammany Hall.

Striking similarities exist between the Sulzer case and that of Trump, but also many obvious differences.

Trump, running as a Republican, won his first and only election—which happened to be to the presidency—after being a New York businessman.

Sulzer was a Democrat and career politician who promoted progressive causes.

Also, although Trump almost universally is expected to be acquitted in a Senate trial, political enemies succeeded in removing Sulzer from office.

But Sulzer was a disruptor in a comfortable capital city. Among what were considered progressive causes at the time was weakening the grip of the political establishment, in this case Tammany Hall, by calling for a primary election to directly nominate candidates in both parties.

Sulzer fired many Tammany-entrenched state employees and vetoed machine-backed legislation. The governor also had several politicians investigated for graft, according to Empire State Hall of Governors.

This enraged Tammany boss Charles Murphy, who pushed his allies in the state Legislature to impeach the governor.

Another similarity between Trump and Sulzer is that there was no straight line for either the current president or the former governor in reaching their rabble-rouser status.

Sulzer hardly had a flawless record, and the charges against him appear to have been based on legitimate campaign finance violations. He never was charged with a crime after leaving office, however.

During his 2016 presidential campaign, Trump occasionally said he had been part of the political establishment, donating to the campaigns of candidates from both parties as a cost of doing business.

Similarly, Sulzer used the Tammany machine in his political rise well before becoming a born-again reformer.

Sulzer was elected to the New York State Assembly in 1889, and by 1893 was the speaker, according to the National Governors Association. He served in the U.S. House of Representatives from 1895 to 1912, including a stint as chairman of the Foreign Affairs Committee. He also was a New York delegate to the Democratic National Convention from 1892 through 1912.

In 1912, Sulzer won the Democratic Party’s nomination for governor with Tammany Hall support, but he wasn’t Boss Murphy’s first choice. Murphy said he feared an independent streak in Sulzer.

However, delegates to the Democrats’ state convention deadlocked, and Sulzer emerged as a compromise candidate deemed suitable to Murphy and Tammany.

Assembly Speaker Al Smith had appointed a special committee earlier that year to investigate the finances of state-funded institutions. Smith later would become governor as well as the Democratic presidential nominee in 1928.

Murphy pushed the committee to expand its purview to investigate the campaign finances of candidates for public office. The panel then determined that Sulzer didn’t report $60,000 in contributions and used $40,000 of the total to invest in the stock market.

The Assembly impeached Sulzer on Aug. 13, 1913, by a vote of 79-45 on charges of filing false statements for his 1912 campaign for governor, misusing campaign contributions, and corruptly influencing the New York Stock Exchange.

The impeachment trial went badly for Sulzer. Henry Morgenthau, U.S. ambassador to Turkey, for instance, testified that Sulzer asked him to keep the contribution “between us as personal.”

Lawmakers removed Sulzer from office on Oct. 17, 1913, after a trial that involved the state Senate and 10 justices of the Court of Appeals, New York’s highest court. Lt. Gov. Martin Glynn took over the governorship.

One day later, 10,000 sign-carrying Sulzer supporters marched on the state Capitol seeking to shame lawmakers. They presented Sulzer with an award inscribed: “A Martyr to the Cause of Good Government.”

The martyr and hero returned to East Side Manhattan. Later that same year, voters elected him to his old state Assembly seat, this time as the Progressive Party candidate.

Tammany swooped in and pushed the Legislature to gerrymander the district to keep Sulzer from getting reelected, the New York Daily News reported.

Sulzer unsuccessfully ran for governor again in 1914 on the ticket of the American Party, which was founded by independent Democrats. He declined to accept the American Party’s presidential nomination in 1916.

Impeachment and removal of governors is rare, having occurred only eight times.

The first to be impeached and removed was North Carolina Gov. William Holden, a Republican, in 1871 during Reconstruction. Holden had aggressively taken on the violent but politically powerful Ku Klux Klan.

The second was Nebraska Gov. David Butler, a Republican, who was impeached and removed in 1882 on charges of misappropriating public funds.

In 1917, Texas Gov. James Ferguson, a Democrat, was impeached and removed after his conviction on embezzlement and other charges stemming from a political battle with the University of Texas.

Oklahoma Gov. John C. Walton, a Democrat, put his state under martial law in 1923 and surrounded the Capitol with National Guard troops to halt his impeachment for misappropriating funds. But the Legislature managed to enter anyway, and impeached and removed Walton from office.

Just a few years later, in 1929, Oklahoma Gov. Henry Johnston, also a Democrat, was impeached and removed for general incompetence.

In 1988, the Arizona Legislature impeached and removed Gov. Evan Mecham, a Republican, on charges of fraud and perjury.

And most recently, Illinois Gov. Rod Blagojevich, a Democrat, was impeached and removed in 2009 for, among other things, attempting to “sell” the U.S. Senate seat vacated by newly elected President Barack Obama.